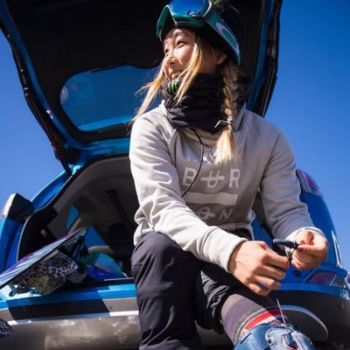 “No excuses,” Connor told iMediaEthics by e-mail. “I muddied the reputation of my employers, colleagues, friends, audience & The Bay Area. I gotta wear it now. I am sorry to Chloe & her family.”

While his comments were made on Barstool, Connor’s comments had implications for his other gig at San Francisco sports radio station KNBR, which is owned by Cumulus Media. That station ended its relationship with him. “Be advised that Patrick Connor is no longer with Cumulus Media,” Cumulus Media program director Jeremiah Crowe told iMediaEthics by e-mail. Connor was suspended initially, according to sports site The Athletic. Connor declined to comment on what happened with Cumulus Media.

In a Feb. 14 tweet, Connor apologized for his “weird attempt to make people laugh.” He added, “My comments  about @chloekimsnow were more than inappropriate they were lame & gross. Im truly sorry Chloe. You’ve repped our country so brilliantly. I apologize to my colleagues & the listeners for being a total idiot.”

Connor apologized on the Feb. 14 broadcast of the radio show, Awful Announcing reported. Co-host Dallas Braden emphatically said Barstool was better than the comments, adding “We understand the severity and the seriousness of the comments made and we will spend every waking moment, every day we are allowed on the air to share the waves with you, the folks that pay attention, to let you know that is not who we are, that is not where this show comes from, that is not where these brands come from.” The audio is uploaded on Barstool Sports’s website.

Deadspin first flagged Connor’s comments made during the Barstool Sports radio show on Sirius XM, posting audio and a transcript.

In a post on Barstool Sports’ website, editor Dave Portnoy wrote about Connor’s apology, noting that it was only the second day of the show Connor was co-hosting, Dialed in with Dallas Braden. Markovich wrote that he wasn’t “personally offended” by the comments but that “you didn’t need to be a rocket scientist to know lots of people would.”

“It just wasn’t funny enough to justify the joke,” he continued. “If you’re going to offend people it better be funny as f***. It’s a hard lesson on day 2 for PCon and it does stink seeing Barstool once again dragged through the mud by the haters and critics for a guy who literally has been with us for 5 seconds.”

In June, Barstool Sports apologized and unpublished a blogpost headlined, “Is Rihanna Going to make being fat the hot new trend?” In that case, Portnoy similarly argued that he didn’t think the post was that bad but it wasn’t that funny and wasn’t done well enough to work. “So if you’re gonna blog about Rihanna gaining weight you better be funny as f*** and you better make it bullet proof,” Portnoy wrote.

“In December, Barstool Sports editor in chief Keith Markovich wrote a post about high school student’s viral video, describing her in the headline as ‘a hot Texas cheerleader.’ After the cheerleader’s mother noted in the item’s comments section that her daughter was 16 years old, the story was taken down.”

Yesterday in a weird attempt to make people laugh I failed. My comments about @chloekimsnow were more than inappropriate they were lame & gross. Im truly sorry Chloe. You’ve repped our country so brilliantly. I apologize to my colleagues & the listeners for being a total idiot.