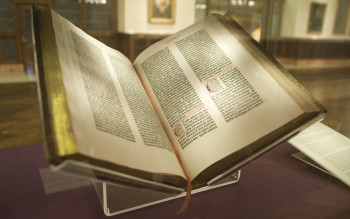 The Daily Pennsylvanian, the “independent newspaper” for the University of Pennsylvania, apologized and retracted  a controversial transcript that claimed U.S. presidential candidate Marco Rubio criticized the Bible.

The video and the inaccurate reporting on it garnered attention briefly during the 2016 election news cycle, and sharing it cost one staff member for Ted Cruz’s campaign his job.

“First published by a student journalist at the University of Pennsylvania, the clip shows Rubio passing Cruz’s father and a staff member in a Columbia, S.C., hotel lobby,” the Los Angeles Times reported. “The staffer waves and Rubio says, ‘Got a good book there’ as he walks by. Rubio pauses, says something unintelligible, then departs with the words, ‘Especially in that one.'”

The Daily Pennsylvanian first reported that Rubio said there weren’t a “lot of answers in” the Bible. Cruz communications director Rick Tyler shared the video online and Cruz fired him. Rubio had actually said the Bible had “all the answers.”

The president of the newspaper, Colin Henderson, apologized for the error, explained how it happened and retracted the report in an apology letter. He said the transcription, now corrected, was “a genuine and honest interpretation” of what the newspaper thought Rubio said.

“The paper thought Rubio said ‘not a lot of answers in there,’ when referring to the book in question,” Henderson wrote. “After publication, a ‘Cruz staffer’ said the book was the Bible, so the Daily Pennsylvanian updated its story to say so, and later to ‘reflect uncertainty over what was said’ since the recording wasn’t clear.”

“We are taking this opportunity to be as self-reflective as possible to figure out where we can improve our editorial practices moving forward to help prevent similar mistakes. We have reached out to alumni in the world of professional journalism, and they will be conducting a detailed post-mortem which will help us to identify exactly where we can make these improvements.”

According to Henderson, the paper initially “acknowledged the inaccuracy of our original transcription” with corrected information and later retracted the post.

The paper should have fact checked and contacted the campaigns before publication, Henderson said. Henderson admitted the errors were “the direct result of editorial mistakes on our part” including not contacting the two political campaigns. Henderson added:

“In the days since the original post was published, we have actively taken steps to correct these errors and provide context for why and how they were made. It is only fair that we have been publicly held accountable for failing to fulfill our editorial responsibilities.”

Separately, the paper published a timeline of its reporting on the video.

The original Feb. 20 Daily Pennsylvanian article in question has been unpublished and replaced with a Feb. 23 note reading: “This post has been removed due to inaccuracies in the text and transcribed subtitles on the video originally embedded into the post. For an explanation of the errors and retraction of the article, see this Letter from the President.”

iMediaEthics has written to the Rubio campaign for comment.