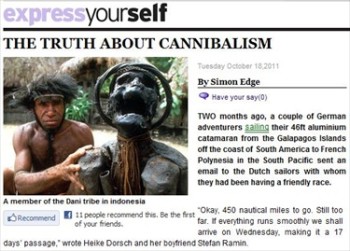 Survival International complained to the PCC over articles including the above Express article. (Credit: Express.co.uk, screenshot)

The Oct. 18 Daily Express article titled “The Truth about Cannibalism” accused residents of Nuku Hiva on the Marquesas Islands of sexual assault and cannibalism.  According to the Express, in August 2011, a German couple, Heike Dorsch and Stefan Ramin, went to the island. Dorsch claims a man named Henri Haiti “chained her to a tree and sexually assaulted her” after he took Ramin to the forest.  The Express went on to report that unnamed “investigators think these were the remains of a human body roasted and eaten by cannibals.”  But, the Express didn’t note which investigators or where they are from. The Express also noted that the body parts haven’t been identified as Ramin’s, but “are being tested.”

Survival International’s Tess Thackara told iMediaEthics by e-mail that it has filed complaints over stories in the Sun, the Daily Mail, the Telegraph, and the Express. However, as iMediaEthics wrote in January, the Express’ parent company Northern & Shell was ousted from the Press Complaints Commission, so the PCC has no jurisdiction over the Express. Thackara explained that Survival is “simply pursuing our PCC complaint” currently which doesn’t include the Express.  Survival International hasn’t had any contact with the Daily Express or its parent company Northern & Shell regarding the story.

We asked Thackara if Survival International’s main complaint with the story is the accusations against the Marqesas Islands or if they had concerns about other aspects of the articles.

“Our concern is with accusations of cannibalism without evidence that leads readers to believe that tribal peoples are cannibals. This is the latest instance of many in which journalists have directly or indirectly accused tribal peoples of being primitive, Stone Age savages. These are the terms, among others, that are often used to describe tribal peoples in the media. In the fight to defend the rights of tribal peoples, these notions are very dangerous, as they uphold racist policies towards tribals. “

iMediaEthics wrote to the PCC’s Jonathan Collett for more information about the complaint. Collett confirmed that Survival International has filed complaints over “articles in Sun, Daily Mail, Daily Telegraph, and Daily Express under Clause 1 (Accuracy) of the Code.”  However, since the Express isn’t under the PCC’s jurisdiction, Collett told iMediaEthics that the PCC “cannot therefore deal with the complaint against the Express but have referred the complainant to their legal department.”

Collett noted that he can’t provide information about the complaints’ timeline because “the matter is ongoing.”

Survival International’s director Stephen Corry is quoted in his organization’s press release calling the article a “highly offensible slur on the peoples of the Marquesas Islands.”  He commented that “Pretending that Stefan Ramin’s reported murder has anything to do with tribal cannibalism is absolute hogwash.”

“This is nothing short of unthinking, stereotyping and dangerous journalism. By its own admission, the Daily Express’s link is tenuous (‘there is nothing to connect the Korowai of New Guinea with the people of the Marquesas – nothing, that is beyond this week’s grisly reports’). If there’s ‘nothing’ there, why make such a link?”

iMediaEthics has written to the Daily Express asking for comment or a response.