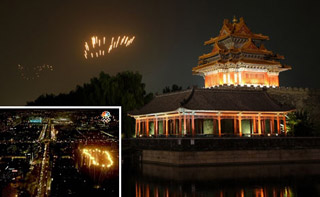 "Inset: The fireworks as they appeared on NBC's TV broadcast. (Image Courtesy of NBC)"
(Photograph by Clive Brunskill/Getty Images)

“One person who certainly didn’t know about the CGI mix-in was M. Philip Butler, a vice president at Fireworks by Grucci who calls himself “Chief Operating Brother-in-Law” of the company. (His wife, Donna Grucci, is its president.) Fireworks by Grucci is one of the country’s pre-eminent fireworks innovators; the company was hired by the Beijing Olympics Organizing Committee to help engineer the presentation.

“Butler says that he was watching the fireworks at home in the U.S. and when the footprints started he was seriously impressed. But when he rewound to watch them again, Butler realized that they were just too perfect to be true…”Butler’s nephew Phil Grucci is in China now and has been traveling back and forth to the country frequently for over a year as a pyrotechnic designer and chief engineer for the ceremonies… Phil Grucci knew in advance that the Chinese had what he calls a ‘ pre-recorded version of what happened.'”