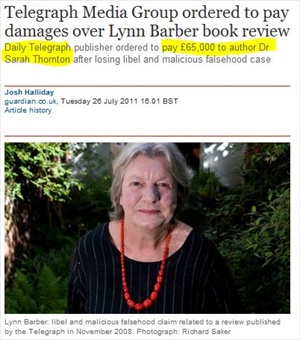 The Daily Telegraph lost a libel lawsuit over a book review (Credit: the Guardian, screenshot)

The Telegraph must pay  £65,000 over a libelous book review, the Guardian reported. Book author Dr. Sarah Thornton sued over statements such as the book reviewer, Lynn Barber’s, claim that Thornton allowed her book sources “copy approval.”

Barber also claimed in her review that “she had not been interviewed by Thornton for her book,” which was a false claim, according to the Guardian.  Justice Tugendhat, who ruled in the case, stated that

“The interview allegation does not relate merely to professional practice. It is an attack on Dr Thornton’s honesty. I accept Dr Thornton’s view that there could hardly be more serious an allegation to make against someone in her profession.”

The Telegraph stated it intends to appeal, according to the Guardian.