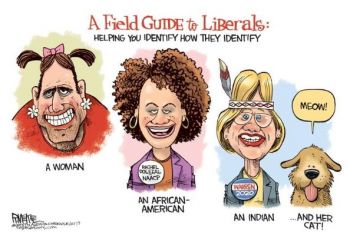 The cartoon (Credit: the Augusta Chronicle)

The Fort Worth Star-Telegram apologized for its cartoon headlined, “A Field Guide to Liberals: Helping You Identify How They Identify” that listed as examples, Rachel Dolezal — the former NAACP leader who is white but identified as black, and who the cartoon labels an African-American — and Sen. Elizabeth Warren, who the cartoon labels as an Indian.

The cartoon was syndicated from the Augusta Chronicle staffer Rick McKee, and was also published on the Chronicle’s website.  McKee  told iMediaEthics “the cartoon stands for itself and I stand behind it.” We asked if he knew which publications used his cartoon, but he said he didn’t know. “Unfortunately, I have no way of knowing where my cartoons are published unless somebody tells me,” he continued. “Most of my cartoons generate both positive and negative responses. This one was not unusual in that regard.”

Dallas magazine D Magazine flagged the cartoon, asking “who approved this” and explaining:

“The above cartoon depicts Rachel Dolezal, who lied about being black, and Elizabeth Warren, whose recent genetic test revealed an ambiguous connection to Native American ancestry, and weaponizes them against some very important conversations occurring right now.”

The apology, from editor Steve Coffman, said the cartoon didn’t meet the paper’s expectations for “high level of respect and quality of thought.” Coffman told iMediaEthics by e-mail the apology was in print and online and declined to comment beyond the apology.

The @startelegram included this graphic in yesterday’s paper. If you don’t get it, inclusion and cultural awareness is the punch line. Xenophobic humor at the expense of others use to be reserved for the “comment section” of social media—now its mainstream. Good job @startelegram pic.twitter.com/dF7JT7gPWL

The Oct. 22 apology from editor Steve Coffman reads in full:

“The editorial cartoon we ran on Oct. 18 has attracted a lot of criticism.

“While we want the Star-Telegram’s editorial page to showcase opinions from divergent points of view, we also strive to maintain a high level of respect and quality of thought.

“The cartoon we published on Oct. 18 did not fulfill that aspiration. I take full responsibility and apologize for the decision to publish it.

“Moving forward, we will work harder to maintain the highest standards of sensitivity and fairness on our pages that the readers of the Star-Telegram expect.”