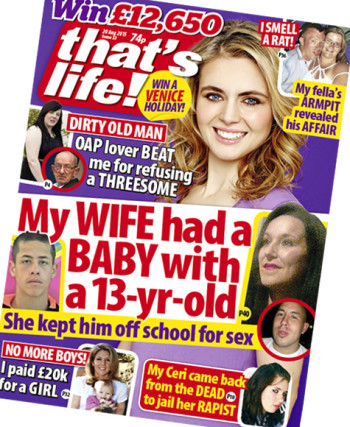 That’s Life‘s Oct. 16, 2014 article was a first-person account called “I’d rather die than kill my baby.” The article told the story of Leanne Owens and “the serious illnesses” she had “while pregnant with her fourth child.”

“It reported that she had risked her own life to give birth to a baby girl, and by extension had risked leaving her other children without a mother,” the UK print regulator the Independent Press Standards Organisation (IPSO) reported.

Owens complained to IPSO. She said the story was wrong because  there was a chance the baby wouldn’t survive, not herself. Owens said the magazine called her to read the story back before publication to get her approval, but she told IPSO “she had repeatedly told the journalist” she couldn’t hear the call and would call back. Owens said she called back three times and never heard back.

On the other hand, That’s Life editors said Owens didn’t complain about the article during the phone call and so it thought the story was fine to publish. Plus, the woman “had initially sold her story to a news agency” which is where the magazine got much of its information, IPSO reported the magazine said.

“It is of particular importance that a first-person piece is an accurate reflection of the experiences of the subject of the article, under whose name it is published,” IPSO explained. It would have been fine for the magazine to have fact checked using a “read-back” of the story but there was no proof that the woman OKed it. Because of that there was no evidence That’s Life “had taken appropriate care over the accuracy of the article.”

The correction and apology for the “significant” error must be published “on the first editorial page” of the magazine, IPSO ruled.

Owens also complained about a photo showing her oldest son being published but given that it was a posed photo, IPSO ruled it was not an intrusion for the magazine to have published it.

The Guardian‘s Roy Greenslade noted that two years ago, That’s Life got in trouble with the Press Complaints Commission, which IPSO replaced, after paying the sister of a murderer. iMediaEthics covered that ruling, which found that That’s Life essentially let the family make money off of a murder. That’s Life‘s Facebook page shows the magazine offers money for stories, letting readers know how much they pay for certain stories they want to write. A July 24 post offers  £700 for a story about catching a partner cheating. The next day, the magazine offered a minimum of  £700 for a story on calling off your wedding. Its website also says: “we pay up to £1000 for every story published – and often even more than that!”