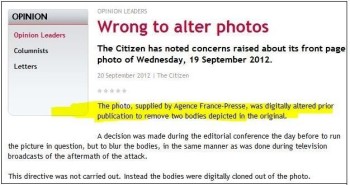 The Citizen apologized for Photoshopping an Agence France-Presse picture to remove two bodies for its Sept. 19 front page, Africa’s Mail & Guardian reported.  The Citizen identifies itself as a “compact tabloid daily newspaper” based in Johannesburg, South Africa.

The newspaper’s Sept. 20 apology explains that it originally planned to “blur the bodies” but “instead the bodies were digitally cloned out of the photo. We regret this and are taking steps to ensure that it does not happen again.” According to the Mail & Guardian, the photo “shows the burnt out husk of the minibus destroyed in a suicide bomb attack that killed eight South Africans in Kabul this week.”

“It is always a complicated decision to decide how much gore and graphic violence we allow onto the front page. We recently published a photo of the Marikana massacre, with the bodies of the dead clearly visible. This photo was not nearly as graphic as the Kabul one, which is why the bodies were not blurred.

“Due to the much more graphic nature of the Kabul blast photo, we felt that blurring the bodies was appropriate. Removing them completely is, however, completely inexcusable and we readily admit that this never should have happened.”

The Mail & Guardian reported that Wits University journalism professor Anton Harber argued that “The Citizen’s motivation may be good, but they have pursued it unethically. If the body was not acceptable to their audience—and one has to ask why others have been judged more acceptable—they should have used another picture, or cropped it, or moved it inside the paper and carried it with a warning, or at the very least have told readers that they had manipulated the picture.”

We wrote to Harber asking if he thought the Citizen’s explanation and apology was satisfactory.  Harber said by email that

“I think they have clearly said it was wrong and are taking steps to prevent it happening again. I believe that adequately deals with this case. The outstanding issue though is why they altered these and not their recent Marikana pics, which included bodies. There remains a suspicion that they treat black corpses different to white ones, and they should articulate a clear policy that applies to all depictions of dead bodies.”

(We’ve written to the Citizen asking for a response to Harber’s concern and will update with any response.)

The Mail & Guardian also noted that the South African Press Code dictates concerning photojournalism.  For example, the code reads that “news” cannot include “distortion, exaggeration or misrepresentation” or “material omissions” and that “Pictures shall not misrepresent or mislead nor be manipulated to do so.”

We wrote earlier this month about news outlets including the New York Times and the Globe and Mail that decided to run the photo of dead U.S. ambassador to Libya Christopher Stevens.

We have written to the Citizen and Agence France Presse seeking more information and comment and will update with any response.

Check out all our fake photo stories.