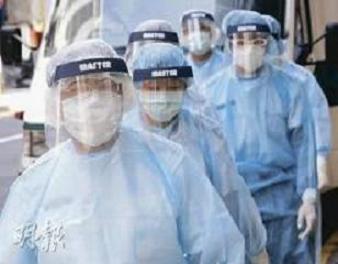 Hong Kong newspaper, Ming Pao, published this picture in their web site's "special report" section. There are six medical workers shown here in ï¿½full gearï¿½ moving into the Wai Chai Metropark Hotel. Their mission was to provide the hotelï¿½s staff and tourists with supplies. This photo embodies the seriousness given by the Hong Kong government to H1N1 swine flu outbreak.

The translation of the headline for Ming Pao, a Chinese newspaper’s special report on the H1N1 virus in North America, captures the media’s prevailing, hysterical tone: “The Trepidation [Panic, Scare, Fright] of North America’s Flu.” Another website, “on.cc,” went with a headline even less restrained, calling H1N1 the “Killing Flu.”

But even by the standards of sensationalized journalism on the subject, the Hong Kong media’s reaction to the H1N1 outbreak may be fairly considered the most alarmist in the region, if not the world.

Is the situation in Hong Kong really the direst? The answer is “no”, when compared to other places, for example Japan and Mexico. The numbers of cases speaks for itself: Japan: 482 cases, Mexico: 6337 cases; Hong Kong: only 33 cases. However, with the media parroting the responses of the hyperventilating Hong Kong government, readers are left with the impression that Hong Kong is in mortal danger.

For instance, SingTao, a major Hong Kong newspaper, reported that Hong Kong’s government has a possible plan to inoculate its entire population of 7 million people. This, despite the fact that the total number of swine flu cases in Hong Kong stands at just 23 as of June 1.

You may recall that the Hong Kong government took the overdramatic lead with its reaction to its first H1N1 case. A Mexican traveler, along with the entire Metropark Hotel, in Wai Chai, was quarantined. According to TVB news reporting, even the taxi driver whose drove this Mexican national to Metropark Hotel, was immediately captured and placed in the “separation camp.” The Mexican government sought to move its citizens back home, complaining that all they could do in these seven days was “to eat, to sleep and to watch TV.”

Now, whenever there is an airplane arrival in Hong Kong, no person can leave the plane until all travelers are tested for flu symptoms. Anyone found to be symptomatic and all other travelers in his section will be quarantined for a couple of days.

The news reporting continues to show people wearing facemasks throughout Hong Kong. Meanwhile, in other big cities, such as New York, hardly a person is seen in the public with facemask protection. One has to wonder whether the constant depiction of fear only feeds the same.

Ming Pao satirized New York’s efforts to keep H1N1 cases under control by closing schools. They pointed out that such actions made matter worse as teenagers hanging out in movie theaters, shopping malls, and so on would serve to further spread the virus into public places instead of preventing it.

The Science Council, under the HK Health Protection Centre, still suggests that Hong Kong would be flu-free if the entire population were to be vaccinated. The plan under discussion would have people more flu-prone receiving the vaccine first. The rest of the Hong Kong people would then follow.

The Hong Kong government’s Swine flu special group member, Yuen Kok Yung, said the government is trying to understand the “safety” of the vaccine before deciding how many to order.

Fair enough. But he also seems bent on ignoring the example of other parts of the world. “Do not totally believe the data from the US and Mexico,” he told a radio show. “We should look at our own situation more. We need to depend on the statistics — like how many people need to get into the hospital, and the number of dead — to decide who are the ones who will most easily get the virus, and then consider who should have the vaccine or not.”

Why is there an overreaction to the flu only in Hong Kong? What are the facts? Is H1N1 so deadly that inoculations for 7 million Hong Kong citizens is the appropriate, scientific-based move? The HK mainstream media does not say.

So imediaethics interviewed a doctor specializing in infectious diseases who participants as a consultant in the health department conference calls, Barry Brause, about the H1 virus status in New York City for a local perspective. When asked about any city planning for mass inoculations, Brause said: “We’re not doing it.” He clarified that the two anti-viral drugs prevalent in the United States are Relenzax (inhaled) and Tamiflu (pills) — no shots. “There is [still] real concern” Brause said, but the “vigilance” is focused on airports.

In other words: Hong Kong, you can probably chill out. Responsible and ethical reporting by the Hong Kong mainstream media – including the Ming Pao, Sing Tao, Oriental Daily newspapers and TVB television – should include seeking out independent world experts, and not just agreeing with the Hong Kong government.

The hysteria continues but interesting enough, Hong Kong’s newspaper gets it right.

The Mayor of New Orleans, Ray Nagin, as reported by the Hong Kong newspaper, Takungpao, and the New Orleans city government, was detained and placed in isolation by the Shanghai government. Turns out that a swine flu victim was traveling in the same airplane with Nagin.

Takungpao also reported that Nagin and the rest of the travelers were symptom-free. It is interesting the Shanghai media did not report that Mayor Nagin was forced into isolation–but the Hong King press did!

According to Takungpao, they called two different departments, The News Center and the Health Dept. in the Shanghai government.  Both refused to comment about the circumstances of the New Orleans Mayor’s detention.

(All translations from Cantonese Chinese by author).