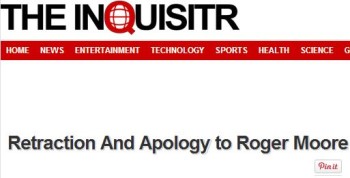 News site The Inquisitr joined the Daily Mail in publishing a retraction to admit that it published quotes from a fake interview with former James Bond actor Sir Roger Moore.

As iMediaEthics wrote back in January, the UK newspaper The People admitted that it had been hoaxed into publishing Sept. 16 a fake interview with Moore.

The phony interview quoted Moore as boasting about his sex life and and appearance.  One such comment The People said Moore made was “I’ve have more women than James Bond.”  The error spread further because the Daily Mail re-published the fake quotes from The People. But, making matters worse, not only did The Daily Mail publish fake quotes, it didn’t give any credit to The People, therefore stealing the phony Moore comments. From there, many international news outlets picked up the quotes and credited the Daily Mail.

The People apologized for its September article and said it was paying Moore “damages and legal costs.” At the time, a legal adviser from the Daily Mail’s publisher, Hilary Kingsley, told us the newspaper was “in negotiations” with Moore’s lawyer but wouldn’t comment on the quote-stealing.

The Daily Mail has since published a correction in its “Clarifications and corrections” column. The late March correction reads:

“An article on September 17 (‘I’ve had more lovers than 007’) included comments attributed to Sir Roger Moore by a Sunday newspaper about his private life.

“That newspaper has now accepted its report did not accurately reflect a conversation with Sir Roger Moore and he did not make the comments it reported. We apologise for any distress and embarrassment caused.”

iMediaEthics asked The Daily Mail for more information about its retraction, such as whether damages were paid and what Moore’s lawyers requested. But Kingsley told iMediaEthics she couldn’t give us any information.  “I regret that a term of our settlement with Sir Roger Moore was that it remain confidential,” she wrote. “Therefore we cannot respond to your inquiries.”

News website The Inquisitr, which wrote Sept. 18 about the Moore quotes in the Daily Mail, also has posted a “retraction and apology.”

The Inquisitr ‘s May 21 correction indicated that perhaps Moore’s lawyers wanted the website to pay damages over the quotes. However, The Inquisitr distanced itself from the error, claiming that, after all, the error was the Daily Mail‘s not the website’s.

The correction says in part:

“The Inquisitr wishes to apologize for syndicating this story, which at the time, due to its publication in The Daily Mail, gave the impression of credibility. Should we pay for the mistake made by The Daily Mail? Since our original article was entirely a report about The Daily Mail‘s article, we believe not.

“We sincerely apologize to Mr. Moore for any distress the multi-source aggregated material we published may have caused and wish him much success and happiness.”

In an email to iMediaEthics, senior editor James Johnson clarified that The Inquisitr didn’t reprint the full Daily Mail article, but picked up the fake comments included in the newspaper’s story.

Johnson confirmed to iMediaEthics that Moore’s lawyer did contact the site over the story, seeking a retraction and damages.

According to Johnson, when The Inquisitr published its story, “217 publications had made the same claim,” leading it to believe the quotes were legitimate.

“The multi-source aggregation approach allows us under 99.999% of conditions to ensure a story is true or in the least based on speculation that is being shared among industry leaders in the field of news publication,” Johnson wrote, adding that The Inquisitr has published 75,000 stories and “so few retractions at the request of readers that I could count them on both hands.”