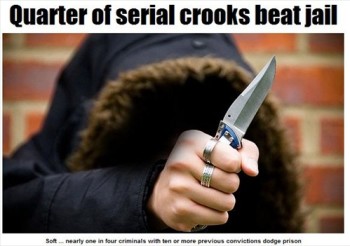 The Sun added a correction to this October story. (Credit: the Sun)

The UK Sun published a correction last month after UK fact checking group Full Fact filed a complaint with print regulatory body the Press Complaints Commission, according to a Dec. 29 report on the PCC’s website.

Full Fact argued that the Sun’s Oct. 18  article, “Quarter of serial crooks beat jail,” was inaccurate.  According to the PCC, it “negotiated” and the Sun published this correction at the bottom of its article:

“We reported on October 18 that ‘more than 40 per cent’ of all knife crime involves juveniles.

In fact, this was an estimate by local police for the London borough of Enfield. The most recent Ministry of Justice figures show the proportion is just under 20 per cent in England and Wales.”

The PCC just published its report on the correction, but UK blog Tabloid Watch and Full Fact both published stories in November, after the Sun’s correction was published on Nov. 11.