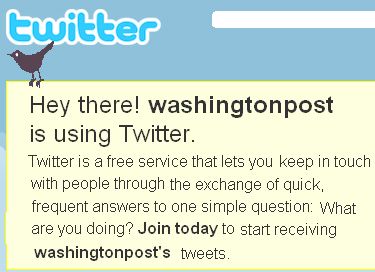 Screen capture of Washington Post's Twitter page shown above, in a detail from their page. The paper recently issued new guidelines for their employees' use of social media, such as Twitter.

To say that newspapers are struggling to keep up with new media would be a generous understatement. After more than a year of severe cutbacks and complete collapses, those print publications that have survived must find a way to position themselves within the Internet landscape.

Recently, the Washington Post issued new guidelines specifying how their staff can use social media platforms like Facebook and Twitter. While the guidelines clarify a few important issues, many media critics also feel that they are too restrictive and reveal the newspaper’s lack of understanding regarding the function and value of social networks.  These critics argue that by taking a rigid stance on how their staff can interact via social networks, the newspaper threatens its own relevence and, perhaps, in the long run, its viability.

News of the Washington Post‘s social networking guidelines first appeared in ombudsman Andrew Alexander’s blog Friday evening. Alexander used tweets by Post co-managing editor Raju Narisetti to show the necessity of such guidelines. One tweet read, “We can incur all sorts of federal deficits for wars and what not…But we have to promise not to increase it by $1 for healthcare reform? Sad.” Though Narisett’s Twitter feed was intended only for a relatively (in Twitter terms) small audience of 90 friends, the newspaper felt that as a journalist, he should refrain from expressing personal opinion on a public platform.

Journalist and communications coach, Steve Buttry, responded to Alexander’s article with a long and detailed analysis. He agreed that Narisetti, “probably wasn’t exercising good judgment recently when he tweeted opinions” but felt that Narisetti’s solution — he closed his Twitter account — and the newspaper’s guidelines were more problematic. Specifically, Buttry found it disconcerting that even though the newspaper’s senior editor Milton Coleman had been working on the guidelines since May, yet in all that time no one had spoken with Narisetti about tweeting personal opinions.

Furthermore, Buttry thought that the guidelines should have grown out of a collaborative discussion among Post staff rather than being imposed in an “imperial fashion.” And he found it even more troubling that the guidelines were written by editors who don’t have Twitter accounts and therefore can’t fully understand the value of the site.  Considering Narisetti’s quick abandonment of his Twitter account, Buttry concluded, “And if the result of this policy is less use of Twitter by Post editors and staff, rather than more, I am quite sure it will harm, rather than help, the Post’s journalism.”

Instead of prescribing fixed rules, Buttry argues that the newspaper should learn how to “engage more fully” with Twitter. “It [The Washington Post] can’t afford to be making decisions in ignorance in the important field of social media.”

At the time of Buttry’s first post on the new guidelines, the newspaper had not released the full text of the policy to the public — another sign that the editors don’t comprehend the impact of online transparency. In his article, Alexander printed excerpts from the policy, which emphasized the importance of maintaining the Post‘s standard of impartiality, free from bias or opinion. Alexander also quoted from a section of the guidelines reminding staff that anything posted online should be considered public.

Last Sunday, paidcontent.org obtained and posted the full text of the policy. Buttry updated his response with a second blog post, adding to his initial concerns about a passage in the policy that reads, “Personal pages online are no place for the discussion of internal newsroom issues such as sourcing, reporting of stories, decisions to publish or not to publish, personnel matters and untoward personal or professional matters involving our colleagues.”

Buttry calls the language of the passage “ludicrous,” arguing that online social networks can foster an ongoing conversation between readers and journalists, one that keeps both parties engaged and accountable. For example, Buttry writes, “Someone on Facebook or Twitter could ask a question about a story. A reporter who has the answer should provide it unless you specifically decided not to answer for reasons such as taste, libel, protecting sources, etc. If the reporter can amplify or clarify on social media, that builds your credibility. Maybe the reporter forgot to put that fact in the story. Maybe you didn’t have room in the print edition (many online stories are identical, even though space is less of an issue), so the reporter just left that fact out or an editor cut it simply for space.”

Regarding the issue of personal opinion, Buttry refers to the Post‘s print policy — which he argues allows for opinion when framed as such, and not as news. “For decades, David Broder has stated opinions in his column and written straight news stories for the Post and he’s widely respected as one of the best and fairest political reporters. The mixing of opinion with factual reporting on social media should not be handled more restrictively than how the Post handles opinion in other media.” [Quoted links are original to Buttry’s post]

MG Siegler at Techcrunch takes a similar, if more outraged, stance on the opinion issue. “…the idea that any kind of reporting lacks any kind of bias on some level is laughable. It’s fine if you want your organization to only present the facts with no opinions, but the notion that those reporters do not have their own opinions is absurd. WaPo can try to hide those opinions all they want, but they exist, regardless.” Siegler admits that “it’s certainly reasonable to ask journalists to remove their opinions from pieces if that’s the kind of news you’re aiming for,” but is wary of a slippery slope effect. “But when you start getting into what they say on their personal online accounts, public or not, things get awfully murky. How deep does that rabbit hole go?”

Not everyone feels as strongly about the guidelines’ flaws. Glynnis MacNicol writing for Mediaite takes a more moderate stance, arguing that the policies seem “pretty reasonable” (though MacNicol’s response was written prior to the paidcontent.org’s post with the guidelines full text). But MacNicol also recognizes that social media’s role in journalism can’t be denied. “In this age of self-branded journalists, where power and readership loyalty is often the result of an audience’s personal connection with the writer is it really a good idea to remove all evidence of personality from the reporter’s product? There is an argument to be made that readers are savvy enough to separate the personal from the reported…” [Quoted links are original to MacNicol’s post]

In the end, Buttry recommends that the Post re-examine their guidelines, encouraging the editors to create an environment where social media is part of the discussion and reporters are trusted to use their own “good judgement” about what is, and is not, appropriate.