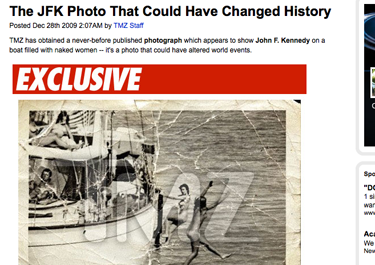 Media hoaxes don’t appear to take a break for the holidays and, luckily, neither do hoax-breakers.

Monday, celebrity news website TMZ published a photo purportedly of President John F. Kennedy on a boat with a number of nude women. By early afternoon, they had corrected their story, explaining that the photo was actually from a 1967 edition of Playboy magazine. The Smoking Gun caught the mistake, as did a SFGate blogger as early as 8 a.m. Monday.

TMZ originally described the photo as belonging to “a man who owned a car dealership on the East coast,” who “kept it in a drawer for years, and would brag to friends he had an image of JFK on a boat with naked women.”

“Had the photo surfaced when John F. Kennedy ran for President in 1960,” they wrote, “it could have torpedoed his run, and changed world history.” This is a pretty far-reaching statement–even more far-reaching when the photo in question isn’t even real.

To bolster their “exclusive” claims, TMZ says they consulted several experts testifying to the photo’s authenticity. However, only one “expert” is quoted.

Professor Jeff Sedlik, a forensic photo expert, says the print appears to be authentic. Sedlik says the photo is printed on paper consistent with what was used in the 1950s.

Two other experts are referenced, but not named. “TMZ has also had two Kennedy biographers examine the photo — they also believe JFK is in the picture,” TMZ writes.

The only thing that this clearly shows is that “experts” do not make a story. StinkyJournalism advocates using scientific experts to examine and investigate the evidence prior to publication. The foundation of any reporting must also be sound, regardless of what experts say. Experts can be wrong, especially if you seek them out not for their independent opinions but to shore up a pre-determined view of the evidence.

The Smoking Gun writes, “In an interview, Larry Dale Gordon, the Playboy photographer who took the yacht image, said that the man TMZ identified as Kennedy was a ‘paid model,’ as were the naked women featured in the shot.’ ”

This, then, was not really a history-changing photo after all. However, a tip of the hat to TMZ for keeping their original (and mistaken) post up, and promptly correcting themselves.