Below, check out iMediaEthics' top ten corrections and errors in the media 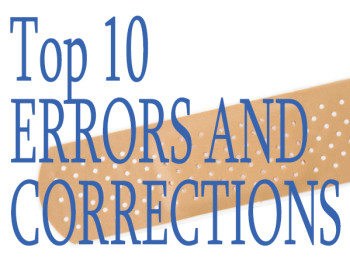 Below, check out iMediaEthics’ top ten corrections and errors in the media this past  year.

George Clooney earned a correction and apology from the UK Daily Mail  after it falsely claimed that the mother of his then-fiance, now-wife Amal Alamuddin is Druze and against their nuptials.

The Mail simply published an editor’s note on its original article reading:

“EDITOR’S NOTE: George Clooney has since refuted the Daily Mail’s report of any rift in his family ahead of the wedding. Click here for more details.”

Mixing up Obama and Osama happened yet again in November. CNN wrongly reported in an on-air graphic that the “seal who claims he killed Obama under attack.”

Despite falsely reporting that the attorney general nominee defended the Clintons during Whitewater, Breitbart simply posted a correction on the bottom of its article reading:

“Correction: The Loretta Lynch identified earlier as the Whitewater attorney was, in fact, a different attorney.”

The correction didn’t, however, reflect that the entire premise of the story was false due to the error.

Washington, D.C. CBS-affiliate WUSA confused a father and son in its reporting. By doing so, it accused a man running for a local neighborhood organization of embezzlement. But the man jailed for embezzlement is the son of the candidate.

“WASHINGTON (WUSA9) — On November 3, 2014, WUSA9 reported that a former DC politician who was jailed for embezzling money from the ANC is back on the ballot running under a different name in a different ward.

“Eighty-four-year-old W. Cardell Shelton is the man who ran against Brenda Shields in the ANC 8C-05 race. WUSA9 regrets the error.”

In February, the National Enquirer corrected a Feb. 17 cover story claiming playwright David Bar Katz said in an interview he and the late-Philip Seymour Hoffman were lovers and that he saw Hoffman  take cocaine and heroin.

The National Enquirer never actually interviewed Katz and instead apparently interviewed someone posing as Katz. The real Katz filed a libel lawsuit against the tabloid.

“The National Enquirer recently published a front page headline and accompanying article about the death of actor  Philip Seymour Hoffman.

“The cover headline and article were premised on an interview with a source who we have now concluded misled us as to his identity.  This resulted in us making statements on the cover and in the article that we now believe to be untrue and that we deeply regret. We therefore extend our sincere regret and apologies to Mr. Hoffman’s family and to David Bar Katz and his family. The National Enquirer takes pride in providing our loyal readers with timely and accurate news. In this instance, we wish simply to say that we were wrong.

“A veteran Enquirer reporter spoke at length with someone who identified himself as David Katz, and he had reason to believe he was indeed speaking with Mr. Katz. The cover headline and much of the article were based on that interview. The Enquirer article was later also published by Radar Online.  We now know that David Bar Katz denies speaking with our reporter, and we believe we were tricked.

“The National Enquirer has a long and deserved reputation for pursuing  stories aggressively and fearlessly,  but in this instance,  we acknowledge we made a mistake. We were duped into believing the source of this information.  Again, we wish to express our deepest and most heartfelt apologies to the family of Mr. Hoffman and to Mr. Katz and his family, as well as Enquirer readers. We are truly sorry.”

In April, the NY Daily News identified the wrong teenager in a report on the suspect accused of a stabbing death of a 16-year-old Connecticut girl, Maren Sanchez.
The Daily News apparently yanked photos from Sanchez’s Facebook page  and  grabbed a image of an innocent friend the Daily News then identified as the suspect.

The Daily News published this correction:

“CORRECTION:  An earlier version of this article contained a photograph of a person incorrectly identified as Chris Plaskon.  In fact, the person in the photograph was not Plaskon and had nothing to do with any of the matters discussed in the story. The Daily News regrets the error.”

4. Breastfeeding a cause of cancer? [link]

A UK newspaper, the Metro, erred in a graphic this April by wrongly listing breast-feeding as a cause of cancer.

The Metro seemingly misinterpreted information provided by UK charity Cancer Research UK when it included breast-feeding in a list of cancer causes including  tobacco, alcohol, radiation and infection.

In response to two complaints to the then-UK watchdog the Press Complaints Commission, the Metro published the following correction:

“A graphic accompanying yesterday’s story about cancer rates suggested that more than 40% of cases were linked to breast feeding and other causes. In fact, breast feeding has been linked to lowering rates of cancer, both in nursing mothers and nursing babies. Further information is available at http://www.cancerresearchuk.org/cancer-help/about-cancer/cancer-questions/how-is-breast-feeding-related-to-breast-cancer”

The AP, NPR an others falsely reported that hundreds of child bodies were discovered at a mother and child home in Tuam, Ireland in a mass grave in a septic tank. They also claimed that the home failed give Christian burials or baptisms for the children.

Only thing is they weren’t actually found. A local historian had said that she had found records that 796 cildren died at the home. But there was no evidence to say if there were actually remains of  children in the septic tank.

“This post originally stated that the bodies of hundreds of children had been found in a septic tank at a former home for unwed mothers in Tuam, Ireland, drawing from news reports that were based on research conducted by a local historian. The story was exaggerated by the media and key details of the historian’s findings have been called into question. It’s not clear how many — if any — bodies may be buried in the disused tank. This post has been updated to reflect developments.”

This spring, two UK news outlets – the Daily Mail and the Telegraph – made numerous ethical lapses when reporting on a BBC series called Lambing Live.

Both the Daily Mail and Telegraph slammed the BBC for putting its 65 staffers up at the hotel, the Marriott-owed Dalmahoy Country Club, instead of frequenting local businesses like bed and breakfasts. However, the outlets failed to recognize that the BBC received special rates when staying at the hotel, and that local bed and breakfasts didn’t have enough room for the entire staff to lodge.

The Mail later corrected its story to admit that the BBC got half off hotel lodging. It wrote:

“The BBC asks us to point out that in fact the BBC paid £58 per night, not the £279 quoted. This rate amounted to a discount of around 50% off the standard rate, substantially less than other hotels in the area and within the BBC expenses policy. Having the team stay in one location simplified travel arrangements to and from the farm. They also say that a crew of 65 is typical for a production of this kind.”

“The headline in this article originally stated “BBC’s Lambing Live criticised after 65-strong film crew stayed at luxury £259-a-night hotel for week”. The price was deleted from the headline to reflect the cost referred to in the story, which the BBC did not supply until after the article was published.”

Un-addressed issues: Both outlets lifted quotes from a blog without attribution, and misquoted from the blog, iMediaEthics found. And, we also found what appeared to be plagiarism.

This summer, Seattle’s KIRO TV news erred by showing a photo of the WRONG cab driver in a report on accusations of sexual assault against a local cabbie.

Despite the error in identifying the wrong driver, KIRO simply published a weak editor’s note, following iMediaEthics’ inquiries about the mistake.

“Editor’s Note: A previous version of this story had photos of two different men, both of whom are cab drivers. Only one is the suspect. We removed the photo of the man who is not a suspect from kirotv.com.”

iMediaEthics investigated this error for a September report. Given the damage this error had on a private individual, the KIRO error tops our list of errors for 2014.