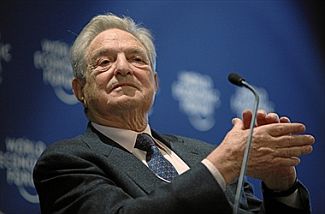 The Toronto Sun apologized to George Soros, seen above, and retracted a column which triggered a lawsuit threat.(Credit: Flickr, "World Economic Forum")

The Toronto Sun retracted a column and issued an apology to billionaire George Soros earlier this month after “receiving a letter of complaint from Mr. Soros’s legal counsel.”

The Sun’s Sept. 18 apology explained that the daily newspaper was retracting a Sept. 5 column by conservative activist Ezra Levant, which “contained false statements about George Soros and his conduct as a young teenager in Nazi-occupied Hungary” and “unreservedly” apologizing to Soros.

“Upon receiving a letter of complaint from Mr. Soros’s legal counsel on September 13, 2010, Sun Media Corporation always intended to publish a retraction and apology for this column. Despite constant efforts on both sides, Sun Media and Mr. Soros’s counsel were unable to reach agreement on the content of a retraction,” The Sun’s apology further stated.

“The management of Sun Media wishes to state that there is no basis for the statements in the column and they should not have been made,” The Sun wrote.

Levant’s column isn’t available on the Sun’s website anymore, but is still searchable on LexisNexis.

The Globe and Mail reported Sept 17 that Soros spokesperson Michael Vachon explained that Soros “was deeply upset” by the column, in which Levant “offered his opinion of how Mr. Soros, a Hungarian Jew born in 1930, survived the Nazis.”  A search of Vachon’s name identifies him as advisor to the chairman of Soros Fund Management (Soros) and on facult at Columbia University’s school of international public affairs.

“It made false, defamatory and offensive statements and as a result Mr. Soros has notified the relevant parties of his intent to sue,” Vachon is quoted as saying. “What is of concern in the article are the false assertions that Mr. Levant makes regarding George Soros’s conduct as a 13-year-old child in Nazi-occupied Hungary.”

iMediaEthics wrote to Soros spokesperson Michael Vachon, who responded that he’d be “happy to speak” with us, but that he had a “tight schedule” that day.  Vachon added that “retraction apology inadequate” and later e-mailed us a link to a Media Matters article on the controversy.

In addition to contacting Vachon again soon about their next move, iMediaEthics has written to the Toronto Sun’s editor-in-chief James Wallace for comment. We will update with any response.

UPDATE: 09/29/2010 9:38 AM EST: Soros spokesperson Michael Vachon wrote in an e-mail to iMediaEthics that “we are keeping our options open with respect to a lawsuit, still considering options.”

Vachon explained that he earlier called the Sun’s retraction “inadequate” because “it did not fully state the true facts, but only said that what it had reported was false.”