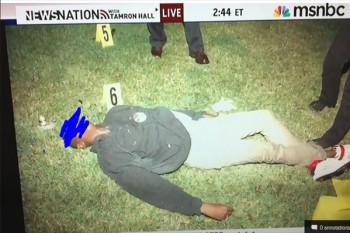 Gawker published the above screenshot of MSNBC's broadcast. MSNBC - and thus Gawker - showed an uncensored image of Trayvon Martin's dead body. iMediaEthics added blue to blur Martin's face but decided to show the censored image to illustrate to readers what the controversy is about. (Credit: Gawker, screenshot, blue added)

Gawker contributor Adam Weinstein published a photo of Trayvon Martin’s corpse Friday, the same day the testimony in the trial against George Zimmerman ended and the jury was sent out to deliberate. Zimmerman is facing charges of second-degree murder and manslaughter in the 2012 killing of Trayvon Martin in Sanford, Florida.

According to graphics shown in the image, which shows Martin lying on the grass dead with what appears to be crime scene markers and the feet of two other people standing nearby, the image was shown on News Nation with Tamron Hall at 2:44 ET.

Weinstein blamed MSNBC for showing the photo during the previous day’s coverage. Weinstein wrote, “A reader of mine sent me this photo last night. As the murder trial of George Zimmerman wheezes to its conclusion, the TV networks dutifully pipe in live pool video from the courtroom.” The headline says, “This, Courtesy of MSNBC, Is Trayvon Martin’s Dead Body. Get Angry.”

Weinstein seemingly lamented his decision to post the photo on Gawker’s website by apologizing to Martin’s parents. Weinstein wrote:

“To Trayvon’s parents, Sabrina Fulton and Tracy Martin, I’m sorry that I feel compelled to share this photograph. Were I a slave to journalistic norms, I would say that it’s somehow in the public interest to see him there. I would point out Florida’s sunshine laws, and the TV network’s incompetence, and argue the inevitability that this image would’ve gained a wider audience than it has already.”

On his website, Weinstein wrote several times on the decision to publish the picture. He denied that the photo was posted as “clickbait.”

Likewise, Gawker’s founder Nick Denton defended the publication of the photo commenting that even if it drove traffic, it also stood the risk of losing advertisers or prompting a boycott, the Huffington Post noted.

According to Poynter, Weinstein said that he was told the image was on MSNBC for a “second or two.”

Talking Points Memo’s Josh Marshall confirmed that MSNBC did air the picture by noting that the site’s “video team saw it but didn’t run it, which was totally the right decision by every standard we’ve always followed.”

Marshall said that Talking Points Memo wouldn’t post the photo based on its standards, but did admit to having “felt guilty journalisticially that [the photo] hasn’t been seen” because of the impact of this case. Marshall explained why TPM wouldn’t post the image:

“We’re not going to run it because we’ve always had a pretty conservative editorial standard about running images that show gratuitous violence or death, dead bodies, etc.”

iMediaEthics used Google Image search to see what other sites are publishing the MSNBC image from Gawker. A quick search on July 12 at 4:50 PM didn’t produce any results from news outlets, although some gossip sites and forums did re-publish the image.

Last month, NBC News published other state evidence pictures of Martin’s dead body on its website, but those images didn’t show his face.  One of the pictures showed Martin’s corpse with a yellow tarp over everything but one of his lower legs. Another image showed Martin’s body facing down. The story warned readers that the crime scene photos could be considered “disturbing.’

NBC News also disclosed to readers in an editor’s note at the bottom of the story that Zimmerman is suing NBC for defamation. The editor’s note reads:

As iMediaEthics has written, NBC asked for a “temporary hold” on Zimmerman’s lawsuit against the network while Zimmerman’s murder trial is ongoing.  Zimmerman’s libel lawsuit argues that NBC News tried to “create the myth that George Zimmmerman was a racist and predatory villain” by editing Zimmerman’s 911 call to suggest Zimmerman identified Martin as black voluntarily even though Zimmerman’s comments about Martin’s race were in response to the 911 dispatcher’s questions.

iMediaEthics has reached out to MSNBC for comment on its airing of the photo of Trayvon Martin’s body.

Check out all of iMediaEthics’ stories on Trayvon Martin and George Zimmerman.