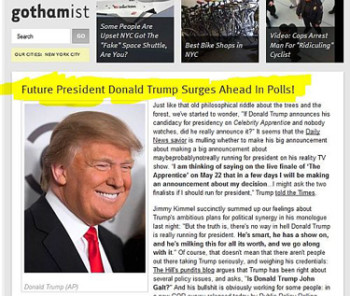 Whatever his legislative legacy, Sen. Jon Kyl (R–AZ) has left America with a wonderful catch-all rebuttal– “It’s Not Intended To Be A Factual Statement.” I wish I had thought of it years ago, when I was looking for some pithy means of describing many poll results, which I knew that even the pollsters who produced those results had to recognize them as bizarrely “unfactual.”

By now, of course, the hashtag has spread all over the Internet. After asserting that “well over 90% of what Planned Parenthood does” is perform abortions, Senator Kyl had to backtrack when the actual figures showed only 3% of the organization’s services involved abortion. His now infamous riposte, put out by his office: The senator’s “remark was not intended to be a factual statement.”

Indeed, it is! But it’s not only politicians who may find it useful. Pollsters, too, could use it, when they produce numbers that defy credulity.

For example, look at the recent poll results showing Donald Trump as a leading candidate for president. Does anyone seriously believe that this celebrity has a ghost of a chance of being the GOP nominee in 2012?

Apparently many pundits take the polls seriously, though the Washington Post blog quotes Republican strategist Alex Vogel: “It is a huge mistake for people to confuse fame with electability or seriousness of candidacy.”

The key to this Trump-focused charade is found in the blog’s description of the poll:

A hypothetical Republican primary? Not a real one? Of course not! On reflection, we realize there is no national Republican primary. Never has been. Instead, candidates must slog through a myriad of state caucuses and primaries, beginning with Iowa and New Hampshire. So, what does that say about the hypothetical national primary polls that tout Trump to be a major force in the GOP?

Remember, it was the national primary polls that had Rudy Giuliani ahead in the non-existent Republican Primary for most of 2007, until shortly before the real caucuses and primaries began in 2008, where Giuliani wasn’t even competitive. The net outcome: Giuliani didn’t win a single delegate to the Republican National Convention!

Yet, here again we have the pollsters telling us who the hypothetical national Republican primary electorate rates as the party’s top choices for president. And Trump is a leading candidate for the GOP nomination?

Another recent example: Last week, CNN reported that 99% of all American adults are so well informed about Planned Parenthood that they hold solid opinions about whether the Federal Government should continue to fund that organization: 65% say yes, 34% say no – and a measly 1% said they don’t have an opinion!

This is the same public that a recent Newsweek poll found wanting in basic political knowledge: 29% couldn’t name the current vice president, 73% couldn’t say why the U.S. was engaged in the Cold War, and 44% were unable to define the Bill of Rights.

But, says CNN, virtually everyone in the country knows all about Planned Parenthood?

This motto would have been especially useful for Gallup’s Frank Newport, who admitted in 2009 that Gallup’s annual “most admired” list of people was really not a list of the “most admired” after all. It showed the public as rating Fox’s Glenn Beck as more admired than the Pope, but Newport demurred, saying “I’m not sure this is the best interpretation of our Gallup data,” acknowledging that in a head-to-head comparison of “admiration,” the Pope would beat Beck.

Last December, Gallup’s annual list of “most admired” showed Glenn Beck beating the Dalai Lama, another clearly “unfactual” statement.  Instead of going into a long, torturous explanation as to why the poll results didn’t mean what they said, as he did the year before, Newport could have simply said:

If Pew’s Andy Kohut had only been aware of this motto, he could have used it right before the last presidential election. While being interviewed on NPR, he was asked about the rather wild swing in the race the Pew poll had just shown – an Obama lead of six points that inexplicably jumped to 15 points and then inexplicably fell back to six points a few days later, right before the election. He was candid, admitting Pew had shown a “boxcar kind of lead” and explaining that in the weeks leading up to the election, many voters’ opinions had not “crystallized.” Thus, one simply couldn’t trust the early numbers.

His response could have been so much more terse, had he just said about that “boxcar lead” –

I don’t want to give the impression that this motto applies only to isolated poll results. It’s a statement that can be applied more generally to multi-poll results. For example, the burning issue of extending the Bush-era tax cuts produced a myriad of polls, all conducted within the same time period, but with significantly different conclusions about what the public was thinking. Anywhere from 29% of Americans up to 66% were said to oppose extending the tax cuts for “rich” Americans.

Of course, these can’t all be factual statements. In fact, as I suggest in my commentary, probably no single poll accurately reflects public opinion. It would be so much easier if we could just write next to the graph of conflicting polls:

They’re Not Intended To Be A Factual Statement.

There are so many more examples of polls that are designed to provide entertainment to the public, but clearly Not Intended To Be A Factual Statement.

We’ll see plenty of those in the coming months. Stay tuned!