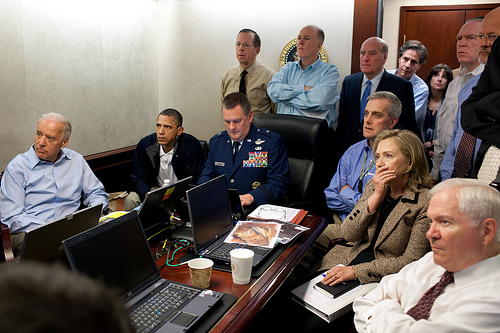 Dee Voch Photoshopped Hillary Clinton and Audrey Tomason out of the "Situation Room" photo, according to Failed Messiah. (Credit: FailedMessiah.typepad.com)

Dee Voch’s Photoshopping looks much like that of Der Tzitung’s, as both Clinton and Tomason’s removal from the photo seem to be the main changes to the White House-issued image.  Dee Voch’s image is in color, however.

In both of these cases, StinkyJournalism wonders why Der Tzitung and Dee Voch would change the record of who was present in this photo.  Given that the White House released several photos of Barack Obama and other officials during the raid on Osama bin Laden’s compound, both of these outlets could have accurately included pictures without Photoshopping out women.

Take this picture, for example, of Obama and National Security Advisor Tom Donilon in a meeting. Or this one, of Obama making phone calls to former U.S. presidents and others before announcing bin Laden’s death. Neither of those photos include women, so Der Tzitung and Dee Voch would save time Photoshopping and accurately report to readers who was present.

iMediaEthics asked Failed Messiah’s Rosenberg if he knew what the captions accompanying either Der Tzitung or Dee Voch’s Photoshop.  “Unfortunately, Yiddish isn’t my strong suit, but I don’t think there is a disclaimer in there,” Rosenberg wrote.

“In response to the controversy on the altered picture of Sec. of State Hillary Clinton in our weekly magazine Dee Voch:

“We fully respect the President of the United States and his entire Staff, regardless of their gender.

“In times when slander, gossip and immodesty dominate coverage in many publications, we, following our modesty rules, try reporting Rabbinical and worldly events in the most proper and unbiased manner.

“We do apologize to the affected persons who may have felt offended; it was unintentional.

“Those who brought this into the spotlight citing racial reasons, is totally absurd! It was we (the Orthodox newspapers and publications) that are credited for much of Clinton’s Orthodox coverage in the primary elections. It was altered for the one and only reason; our rules of modesty not to publish pictures of women, regardless of their stature or modesty.”

(Thanks also to Failed Messiah for letting us know Dee Voch had issued an apology.)