Two Misleading Polls on the Sequester 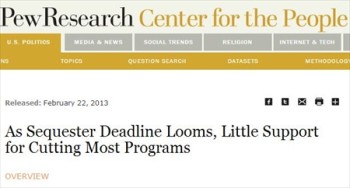 A screenshot from Pew Research Center's poll on the sequester. (Credit: People-Press.org, screenshot)

Two recent polls come to contradictory conclusions about the public’s willingness to accept spending cuts imposed by the sequestration that went into effect March 1.

A Pew poll last month reported that among 19 government programs tested, not one elicited majority public support for cutting spending. And on 18 of the 19, there was in fact majority support for either increasing or maintaining spending at the same level.

By contrast, a new ABC News/Washington Post poll reports that by a nearly 2-to-1 margin, Americans support across-the-board government spending cuts, except for military spending, which Americans say they don’t want cut by almost the same margin as they support cuts to other programs.

By asking the general question about across-the-board cuts, ABC/WP found majority support. But when it asked about a specific program, the military, it found majority opposition.  Had the poll asked about most other domestic programs, it would no doubt have found opposition to cutting them as well.

That’s where the Pew poll comes in. It asked respondents about a series of specific government programs, and provided three response options: increasing spending, keeping it the same, or decreasing spending.

Contrary to the ABC/WP findings, Pew’s results showed that people were more likely to want cuts in “military defense” than in 14 of the other 18 programs. The percentage was small – just 24% opting for cuts in military defense – but the percentages for cutting the other programs (such as Social Security, Medicare, education, food and drug inspection, roads and infrastructure) were even lower.

So, why would ABC report such fallacious figures, when the pollster must certainly know that the public usually supports cuts in general – but just not for specific programs?

If we assume no partisan bias intended by ABC and the Washington Post, then the answer must lie in economics: Pew asked several questions with several response options, to get a more detailed look at what the public is thinking, while ABC/WP asked just two quick questions, giving them a quick news story at a much lower price. Apparently, what the public was actually thinking mattered less to ABC and the Washington Post than getting some plausible-sounding story in the news.

I’ve suggested why the ABC/WP poll is misleading. So, why is the Pew poll misleading as well?

The answer: Most people don’t have a clue as to how much money is being spent on any of the programs, or what cuts would do to those programs. In fact, Pew doesn’t even provide an amount for the “cuts” in spending. It just asks in general if people want more, less or the same amount of spending (and provides no explicit “don’t know” option). In 14 of the 19 programs, a plurality wanted spending to remain the same. That’s a default position: If you don’t have a clue, then keep spending the same.

An indication of how little people really know about such issues is revealed in an earlier Pew poll, which reported that only about a quarter of the American public was paying close attention to the sequester debate. Yet, the sequester poll, which used forced choice questions to gloss over public ignorance, shows that from 92% to 99% of the respondents expressed opinions about spending. Go figure!

The Pew poll on the sequester does measure some general attitude about each program, but to suggest the poll is an accurate reflection of how much people really know and want with respect to government spending is misleading.

Two Misleading Polls on the Sequester