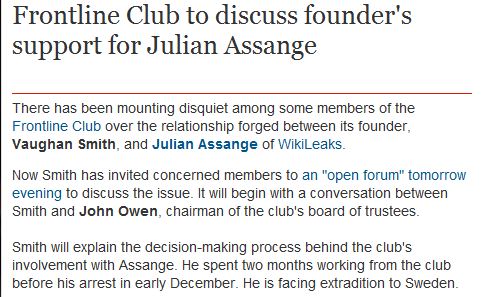 At a press conference hosted by the Frontline Club this week, Rudolf Elmer handed over two discs of data about bank accounts to Julian Assange. (Credit: The Guardian)

The UK Frontline Club’s founder Vaughn Smith has been an open supporter of Julian Assange and WikiLeaks. Assange stayed at the Frontline Club in the weeks prior to turning himself in to UK authorities in December and is currently staying with Smith while out on bail.

According to The Guardian’s Roy Greenslade, “some journalists who frequent the Frontline Club have become uneasy about Smith’s support for Assange, claiming that it raises issues of transparency and compromises the club’s neutrality.”

As a result, Smith invited “paid-up members” to an “open forum” Jan. 19 to discuss the relationship between Assange and the Frotnline Club.