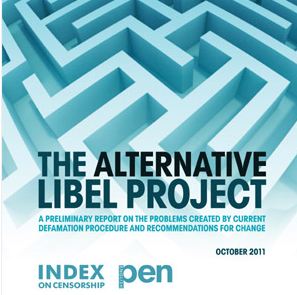 According to the full published paper for the Alternative Libel Project, the project “demonstrates that there are alternative methods of dispute resolution” that save time and money.

“Alternative methods of dispute resolution” (ADR) that the project suggests include mediation, arbirbation, and “Early Neutral Evaluation” — when a judge assesses a case early on in the process.  The project called for the government to “promote the routine use of ADR.”

The project also calls for “reform of the court process” in libel cases.  According to the report, some reasons for reform include high costs, lengthy court battles and unsatisfactory rulings.  We’ve written previously about libel law in the UK, which is considered a libel tourist destination because its libel laws are plaintiff-friendly.

The report notes that

“Our report must of course be set in the context of the Leveson Inquiry, which is examining the  practices of the media, who are often litigants in  libel actions.  We are conscious that Lord Justice  Leveson may recommend the establishment of a new body that offers adjudication or arbitration for cases involving the media.  We would welcome this, as we do any form of alternative dispute resolution (ADR) which the parties choose to use because it is cheaper and faster while being as fair as litigation.”

The report cited case studies such as one in which “two long-standing foster parents were accused of terrorism in a national newspaper.” They ended up losing “their role as foster carers and with it their income” and opted against libel lawsuit because of the cost, according to the paper.

The Alternative Libel Project noted  that mediation could be a good tool in libel reform for a variety of reasons including: “it is private; it allows for any solution; it gives the personalities involved an opportunity to meet face to face; it gets parties talking; it removes guesswork by giving parties a realistic view of what the other party wants; it is focused on a solution,” and more.  According to the Alternative Libel Project, mediation has a “success rate” for settling “more than 90 per cent” of “defamation claims.”

The full paper is published here,

We have written to the Libel Reform Project for more information and will update with any response.