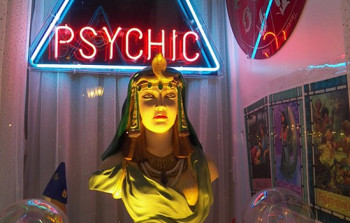 The Mail accused Sally Morgan, who also goes by the name “Psychic Sally,” of having employees feed information through an earpiece to her to help her “scam” an audience.

“The article thereby suggested that Mrs Morgan had deliberately and dishonestly perpetrated a scam on her audience in Dublin,” her lawyer Graham Atkins said in court, according to the BBC.

Morgan had called the article “completely false and defamatory.”

The Mail‘s lawyer Brid Johnson apologized to Morgan and retracted its claims. “The Daily Mail withdraws the suggestion that Mrs Morgan used a secret earpiece at her Dublin show in September 2011 to receive messages from off-stage, thereby cheating her audience, which it accepts is untrue,” Johnson is quoted by the BBC as saying in court.

The Mail’s article originated from an accusation on Irish radio by two audience members who “said they thought they had heard two crew members saying something which Morgan then repeated on stage,” The Guardian reported. Morgan and the theater denied that claim and the two alleged crew members “were subcontracted by the theatre and not members of Morgan’s team.”

Morgan published a statement on her website about the settlement in which she called the Mail’s article “an unjustified and unfair attack.” She said in part:

“I bought [sic] this libel action against The Daily Mail not to be a spokesperson for mediums and mediumship, nor for financial gain, but for the simple reason of principle. I have done nothing wrong and deserve to have that acknowledged. I have never cheated.

“There will always be sceptics who attack my work and I understand and accept that. However, to libel me and falsely accuse me of a con trick does not constitute rational commentary or debate. I hope now this settlement and apology will repair the damage that has been done.”

iMediaEthics has written to Morgan and the Mail‘s lawyer for comment.

The Daily Mail recently paid about $26,000 to a UK politician, Tom Clarke, in a libel settlement..