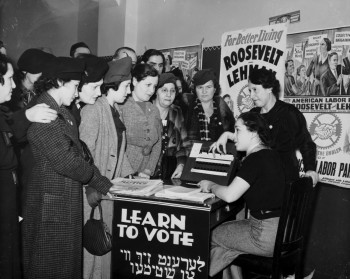 Women surrounded by posters, teach other women how to vote, 1935. (Credit: Unknown, Kheel Center via Flickr)

“The Daily Telegraph urges its readers to vote Conservative,” the e-mail, signed by Telegraph editor Chris Evans, read in part.

“Subscribers had signed up to receive a daily e-bulletin, but by promoting an election campaign, the paper broke the rules around direct marketing,” the ICO said in a press release, noting that “none of the subscribers had given specific consent to receive that kind of marketing, a requirement under the Privacy and Electronic Communications Regulations.”

“People may well perceive the paper’s editorial content to have a political bias, but when the Telegraph emailed people directly calling them to vote for a political party they crossed a line,” Steve Eckersley, head of enforcement at the ICO said in a press release on its website.

He went on, “People signed up to the Telegraph’s email service so they could catch up on the news or find out about subjects they were interested in. They did not expect to be told who they should be voting for.”

The Telegraph told iMediaEthics: “Although we are disappointed with this ruling, we note the mitigating factors that the ICO highlights in its report: the response to the email was overwhelmingly positive, and the ICO agreed in its ruling that it was unlikely to cause distress. Indeed, only 2 complaints were received by the ICO. The ruling also recognises that we fully co-operated with the ICO and that we have taken steps to make sure this should not happen again.”

A spokesperson for the Telegraph said in an e-mail to iMediaEthics it hasn’t sent similar e-mails before.

The money from the fine will go to “the Treasury’s Consolidated Fund and is not kept by the Information Commissioner’s Office,” according to the Independent.

The Conservatives, the party the Telegraph‘s email supported, ended up winning a “12-seat majority” in the May 2015 election, the BBC reported.