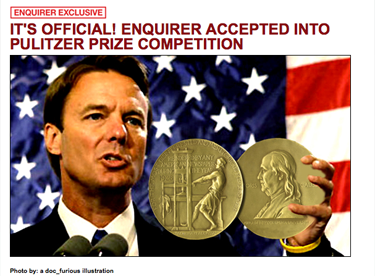 The verdict is in; the National Enquirer will be considered for a Pulitzer Prize this year for its coverage of the John Edwards affair.

The New York Times quotes an unnamed source “briefed on the matter” who confirms officials “decided that the Enquirer is, indeed, a newspaper.”

Last month, iMediaEthics covered the Enquirer‘s bid for the prize for it’s reporting on the John Edwards scandal. As we explained, the Pulitzer Prize committee administrator originally said the Enquirer would be ineligible because it refers to itself online as a news “magazine.”

Sig Gissler, the prize administrator, told ABC News Jan 22, “We checked the Enquirer Web site, and it apparently calls itself a magazine. Under our rules, magazines (both print and Web versions) and broadcast entities are ineligible.”

But, upon review, according to the Times, the Huffington Post, and the Enquirer itself, the committee has now decided the National Enquirer is more news than magazine. The Times, after contacting Gissler, wrote that he told them “he and his colleagues never publicly discuss the eligibility of any specific publication.”

“We apply our criteria, and if publications meet them, we allow them to participate,” he said.

Debate is still open as to whether the publication deserves to win. As StinkyJournalism wrote last month,

Kevin Smith, president of the Society of Professional Journalists, told ABC News that “no paper that pays for information should be eligible for the prize.”

“It’s clear we should be a contender for this,” Enquirer Editor Barry Levine told the Washington Post, arguing “we’ve had every aspect of reporting, from pursuing financial documents to stakeouts to cultivating sources.”

Safran at Lost Remote admits, the Enquirer may not actually deserve a Pulitzer. But the fact that they’re disqualified from winning one on a technicality raises the possibility that at some point, some other online news site that doesn’t meet the Pulitzer’s rules for eligibility might actually write something worthy of being recognized. “I am concerned that the continued snobbery of the Pulitzer committee will stop great reporting from the recognition it deserves,” he writes. “We all know the cachet that comes from ‘winning a Pulitzer.’ It’s time for the committee to interpret Pulitzer’s true intent – to honor great news regardless of where it comes from.”

The Pulitzer committee, in being flexible on the definition of a “magazine” and accepting the Enquirer for consideration, has given an encouraging sign to other new or non-traditional media looking to be recognized for outstanding journalism.

According to Emily Miller at Huffington Post, “The Enquirer is in the running for the Pulitzer in two categories: “Investigative Reporting” and “National News Reporting” for The National Enquirer staff.”

We will update with any new developments.