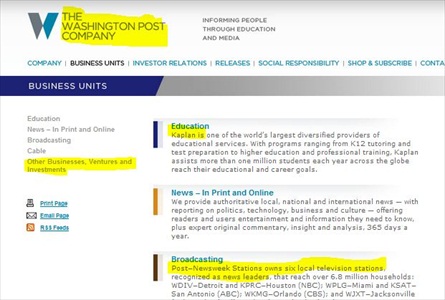 Kaplan offers both tutoring services for exams like the SAT and also  “online master’s, bachelor’s, associate’s, and professional law degrees, as well as online certificate programs.”  The Washington Post reported in early November that Kaplan declared third quarter revenue of $743.3 million. Further, according to the Post, Kaplan serves as “62 percent of the entire company’s revenue.”

Alexander explained that the problem hasn’t been disclosure, but in-depth reporting.  “Whether in stories or editorials about Kaplan, The Post has properly noted its self-interest. Disclosure is one thing, but depth of news coverage is another.”

The Society of Professional Journalists advises that journalists “avoid conflicts of interest, real or perceived” and “disclose unavoidable conflicts.”

While the Post has covered some of Kaplan’s problems, compared with other mainstream news outlets like the New York Times and Bloomberg, the Post hasn’t reported with the same intensity, Alexander claimed.

The New York Times, for example, reported Nov. 10 that the Department of Education has suggested ending “federal financing to programs whose graduates have high dept-to-income ratios and low repayment rates.”

According to the Times, the Post Co.’s chairman, Donald Graham, “has emerged as the highest-profile defender of for-profit education.”  The Post Co. has spent the most money of higher-education companies “on lobbying in the third quarter” and the Post’s Aug. 22 editorial argued “Against the regulations.”

In that editorial, the Post disclosed: “Readers should know that we have a conflict of interest regarding this subject.  The Washington Post Co., which owns the Post newspaper and washingtonpost.com, also owns Kaplan University and other for-profit schools of higher education that, according to company officials, could be harmed by the proposed regulations.”

Steele reportedly said that public perception of the Post “could suffer” if readers think that the Post isn’t properly reporting on Kaplan.

“Perception is powerful,” he is quoted as saying. “It’s no secret around the country that The Post has benefited phenomenally by the Kaplan piece of the financial puzzle these last few years.”

While Alexander reported that some Post newsroom staffers “suggested” that the Post could report on Kaplan “by bringing in a team of outside reporters, perhaps contracting with respected Post veterans who took buyouts in recent years” or by “hiring an investigative news organization like Pro Publica,” Alexander opined that he doesn’t believe that step is necessary.  That is, unless The Post fails to report while “competitors offer major new disclosures.”