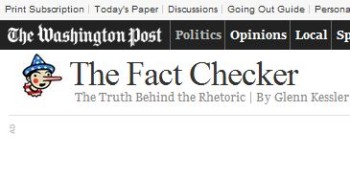 We heard back from Glenn Kessler, the columnist for the Washington Post’s Fact Checker.

Kessler was recently awash in controversy. He commented about, but did not fact check — a recent Washington Post report, “Romney’s Bain Capital Invested in Companies that Moved Jobs Overseas,” that Barack Obama and Mitt Romney’s political campaigns twisted differently both to their own advantages.

Kessler ventured to write that the two campaigns mis-used the report, but his column attracted attention because he stated that despite having a column that fact checks, he wouldn’t fact check the Post‘s article itself.  His column’s comment that “The Fact Checker does not check the facts in the reporting of Washington Post writers or columnists, despite the many pleas of readers to do so” stood out and was galling to many readers as the comments showed.

As iMediaEthics noted in a previous report, Kessler’s description of his column limits his fact checking jurisdiction only to “statements by politicians and political advocacy groups.”

So iMediaEthics asked Kessler by email why he didn’t just go ahead and check the Post‘s reporting as it seems to fully qualify under the description. We also asked why he did not just refer the issue to the newspaper’s ombudsman or skip saying anything on the issue.

“I can’t really be in the position of verifying what my colleagues have reported. That’s not my role. The Ombudsman is specifically tasked with looking into concerns about reporting practices at the Post.”

He went further and indicated that his editors told him to comment about the issue (“The newspaper believed it would be useful to address what was a flawed interpretation of the article’s conclusions”) and that they did not appreciate that “the article was being used in a campaign ad that distorted its meaning.”

In a follow-up email, iMediaEthics asked how did he know the WaPo article’s meaning was being distorted if he did not do a fact check. Kessler answered that he was satisfied with doing no independent fact check on the Post‘s reporting as he “had long discussions with the reporter who wrote the article and every word I wrote was reviewed by an editor involved with the article.”

While speaking to fellow WaPo employees may have given Kessler an understanding of the reporting, iMediaEthics notes it is still not fact checking.

Kessler informed iMediaEthics that while “we have on occasion noted when a Post article (or Fact Checker column) may have been misquoted,” he thinks this is the first time that “we have devoted a whole column” of the Fact Checker to a Post article.  The Romney article “was a special case” he wrote “because the interpretation was so off.”

“I prefer to stick with non WaPo content,” he added.