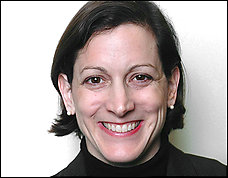 In her defense of Roman Polanski, Washington Post columnist, Anne Applebaum, did not disclose that her husband was linked to lobbying efforts that sought to free Polanski from prison. (Photo from her Washington Post bio)

When Washington Post op-ed columnist Anne Applebaum decided to write a defense of film director Roman Polanski, who was recently arrested in Switzerland 31 years after fleeing the U.S. where he was charged with raping then-13-year-old Samantha Geimer, Applebaum failed to disclose that she is married to the Polish Foreign Minister, Radoslaw Sikorski.

Sikorski, along with Poland’s President Lech Kaczynski, is lobbying the U.S. to drop proceedings on behalf of their native son (Polanski’s father was Polish and the family emigrated there from France when Polanski was a young boy).

Blogging under the pen-name Patterico, an employee of the L.A. County District Attorney’s Office (which is seeking Polanski’s extradition) discoverd Applebaum’s connection to Sikorski with just a quick visit to her personal website. Patterico links to a news report that names Sikorski as one of the Polish government officials defending Polanski.  And the blogger points out that Applebaum has disclosed her conflict of interest in other columns, one just a few days before her defense of Polanski.

Applebaum has now responded to Patterico’s post, which he embedded as a link on Applebaum’s original blog post. She redirects criticism at Patterico, claiming that he only disclosed his L.A. County DA connection in an update — which is false. That disclosure is in the original text of his post along with the fact that this is the office attempting to extradite Polanski.

Applebaum then goes on to claim that “people who write about a variety of things” — which is a fancy way of saying, “I” — are “sophisticated” and that their “views derive from many sources, and that they are not simply a mouthpiece for their organizations or their spouses.” She also argues that she regularly provides full disclosure about her marriage and therefore, “I have to assume that the bloggers who have leapt upon this as some kind of secret revelation are simply unfamiliar with my writing.”  But if Applebaum thought that her previous disclosures would suffice for her entire body of work and tenure at the Washington Post, why does she provide multiple occasions of prior disclosure? Furthermore, it is unfair to assume that a reader of one of a writer’s columns will have read other columns in which that same writer provided this disclosure.

The only argument that seems tenable is that at the time of her post, Applebaum claims she “had no idea that the Polish government would or could lobby for Polanski’s release, as I am in Budapest and my husband is in Africa.” As her post went up less than 2 hours before the news report Patterico links to which names her husband, this may in fact be true. And while readers may recognize that she is not a “mouthpiece” for her husband’s views, her lack of disclosure in this particularly controversial column creates more suspicion than if she had come right out and reminded us.