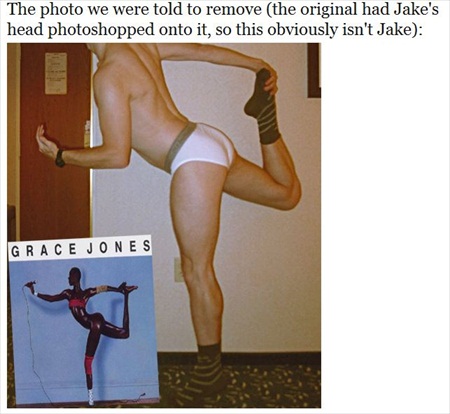 It's reported that Jake Gyllenhaal's attorney demanded the above fake photo be removed from multiple websites. Buzzfeed.com stated it was complying with the cease and desist request and removed the allegedly fake photo. However, instead Buzzfeed.com republished the same photo but this time cropped it to cut off Gyllenhaal's head. The inset photo is of a similarly posed Grace Jones album cover. (Credit: Buzzfeed.com)

Jake Gyllenhaal may sue over what he says is a fake photograph of him posing in his underwear,  ABC.net.au reported.  The photo shows the actor dressed in underwear turned to his side in what is described as a Grace Jones-like pose. (See the photo here.)

The takedown letter (see here) claims the photo is faked with Gyllenhaal’s head on someone else’s body.  In it, Gyllenhaal’s lawyer claims other sites have removed the photo and that the photo defames Gyllenhaal. The lawyer stated:

“Your publication of this fake photo violates many legal rights of our client by, among other things, defaming him, portraying him in a false light, violating his right of publicity and constituting a false designation of origin in violation of the Lanham Act.  Demand is hereby made for immediate removal of the fake picture.”

Queerty.com responded to the legal threats stating that it wasn’t removing the photo both because “it hasn’t been proven fake and because their letter bumped it from ‘funny and cute’ to ‘actually newsworthy.'” Queerty also admitted that “We can’t — and won’t — claim that this picture of him is definitely authentic, since we just don’t know.”

Queerty.com’s original post was published May 17 and states in an update that there are claims the photo is fake.

Buzzfeed.com stated it was complying with the cease and desist request and removed the allegedly fake photo. However, instead  Buzzfeed.com republished the same photo but this time cropped it to cut off Gyllenhaal’s head.

After getting the lawyer letter and then blurring the actor’s head in their posted photo, Gaysocialites.com wrote:

“Editor’s note:  We received an e-mail from someone who says they are Jake Gyllenhaal’s attorney and claims that the photo of the actor imitating Grace Jones’ album cover is a fake.  We wouldn’t doubt it, so we blurred Gyllenhaal’s face from said photo, but left the body for your viewing pleasure.”

“First of all, if it is Photoshopped, welcome to the Internet, Mr Gyllenhaal. Second of all, either way, does he really think that this photo would affect his ability to be cast in films? He’s a decent, very attractive actor with beautiful blue eyes and chiseled features. That’s why he gets cast in films.”

Hollywood Reporter noted that “Jake isn’t the first actor to allege defamation by Photoshop — see Demi Moore vs. W Magazine — but this is a pretty unique situation.”

In that case, Moore denied the cover photo of her on W Magazine in 2009 was doctored. However, the photo was criticized by bloggers and photographers. W’s photographers defended the photo by saying they didn’t “do anything unusual or out of the ordinary on Demi Moore for the photo.” An attorney for Moore called on one blogger critical of the photo to retract his blogs and tweets about the photo.

iMediaEthics is writing to Gyllenhaal’s representatives for comment and will update with any response.

UPDATE: 05/21/2011 4:49PM:  Headline and text is updated to clarify that at least three sites received lawyer letters. The result is: Queerty.com refuses to take the photo down.  Gaysocialites.com kept the image up but blurred the actor’s head in the fake photo… It was Buzzfeed.com that has removed the image and replaced it with a cropped version of the same photo. We also added information above about Buzzfeed.com’s response to the cease and desist letter.