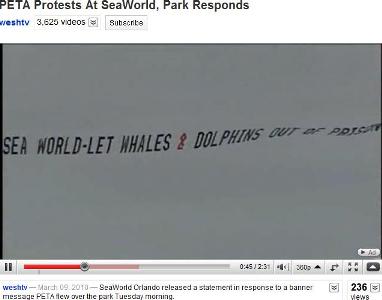 PETA wants SeaWorld and its top executives charged with manslaughter in the Seaworld trainer death of Dawn Brancheau.  Does PETA have a legitimate argument or is it a publicity stunt? Their charge falls right in the middle of an ongoing battle in Florida that the media has waged with Seaworld and Brancheau’s family over the public access to video capturing her death.

SeaWorld trainer Dawn Brancheau was killed in February after the orca (killer whale) Tilikum pulled her into the tank and drowned her.  SeaWorld and Brancheau’s family has gotten a judge to continue a temporary injunction against the release of video footage of Brancheau’s death, as iMediaEthics reported last month.  The media is arguing the video footage should be at least released to the media so it can analyze any public safety issues or problems at the park.

The animal rights organization announced via an April 15 press release on its Web site that its general counsel sent a 12-page letter to Lawson Lamar, the state’s attorney for Orange and Osceola county “urging him to consider manslaughter charges against SeaWorld and its senior executives in connection with the battery and drowning of orca trainer Dawn Brancheau.”

PETA president Ingrid E. Newkirk said in the press release that SeaWorld’s record indicates reckless disregard and that the organization should be considered responsible for Brancheau’s death.

“The record reflects that SeaWorld and its senior executives have shown reckless disregard for the lives of its trainers by paying them to be in close contact with massive, powerful wild animals who can kill them in a flash.  Corporations must be held accountable when their greed causes suffering and loss of life.”

Jeff Kerr, general counsel and vice president of corporate affairs for PETA, told StinkyJournalism that PETA is “asking that the law be applied evenly to SeaWorld because of the obvious danger that was known and presented by Tilikum and the other whales to the trainers.” Kerr said that the charge of involuntary manslaughter is there for cases like Brancheau’s death.

Tilikum is associated with three deaths including Brancheau’s, as iMediaEthics reported March 21.

“These animals are called killer whales,” Kerr said.  “The danger is obvious.”

Kerr countered the call for action is not a publicity stunt.  It’s a “very serious and well thought out, well analyzed request by our legal department to the state attorney in that jurisdiction responsible for protecting the citizens and workers of that region.  It’s an urgent request that he and his office pursue the right course of action” and prevent this from happening again.

Danielle Tavernier, a spokesperson for the state’s attorney for Orange and Osceola county’s office, said that the office did receive PETA’s letter, but the office is unable to initiate any investigations.  Law enforcement must bring an investigation to the office for anything to happen.  Kerr responded to iMediaEthics that PETA sent its request to the Orange County sheriff’s office on April 19.

The Telegraph Herald reported April 26 that there will be a congressional hearing in Washington, D.C. April 27 on marine mammal captivity. As Orlando TV station WFTV reported, “lawmakers want to hear testimony from experts about marine mammals in captivity.”

According to the Committee for Natural Resources’s newsletter, the subcommittee on insular Affairs, oceans and wildlife will hold the hearing.  SeaWorld’s curator Julie Scardina is scheduled to testify.  Her written testimony, posted online before the hearing, reads that she believes current standards for marine mammal parks are sufficient and that “additional federal regulations are not needed.”

This recent death at SeaWorld wouldn’t be the first time animal attacks led to manslaughter charges, the release said, referring to a 2007 Florida case where a man whose pit bulls attacked an elderly woman was convicted of manslaughter.

Similarly, in 2005, a Virginia woman was convicted of involuntary manslaughter after her pit bulls killed an 82-year-old woman, Fox News reported.

Orlando TV station CF News 13 reported April 16 that for now, Tilikum is still not performing in SeaWorld shows and trainers are forbidden to swim with any whales.  In an e-mail to StinkyJournalism last month, vice president of communications for SeaWorld, Fred Jacobs, said SeaWorld is reviewing its policies toward trainer interaction with killer whales.  In an e-mail to StinkyJournalism April 19, Jacobs wrote the review is still going on, and that whether trainers can enter the water with the whales will be decided in the next several weeks.

Jacobs wrote that “when the review is done (and includes the work of the external panel of marine mammal experts) we will make a summary public.”

“There are occasional injuries associated with animal interactions in ours parks — these are large and powerful animals after all — but they must be taken in context,” Jacobs wrote.  “We have been in operation for 46 years, have played host to more than half a billion people and have had more than 2 million separate interactions with killer whales in that span.”

iMediaEthics has contacted The Orlando Sentinel regarding their coverage and will post any response.