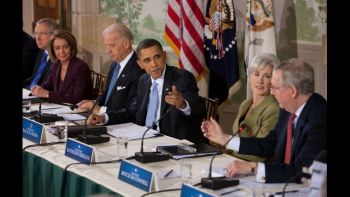 This photo from the White House Web site shows President Barack Obama at a meeting on Feb. 25, 2010, discussing health insurance reform. A report by the CBO sparked a recent tiff between the Associated Press and the Democrats over fact checking accuracy. (Credit: Chuck Kennedy)

The Democrats took to the blogosphere to blast the Associated Press for poor fact checking in a recent story that alleged health insurance premiums will increase if Congress passes President Obama’s proposed health care reform.

In a not-so-subtle blog by White House Communications Director Dan Pfeiffer, posted later that day, the Democrats defended health care reform and advised the AP to take their own advice.  Titled, “A Premium on Accurate Information,” the blog said “[T]here’s a lot of misinformation flying around. Case in point: a recent headline suggesting that health premiums would increase under the President’s health care plan.”  Pfeiffer also included a direct link to Alonso-Zaldivar’s story.

The primary basis for the discrepancy between the Democrats and the AP revolves around the differing interpretations of conclusions from an analysis on the projected impact of health care reform on premiums conducted by the Congressional Budget Office last November.  The CBO is a nonpartisan organization that provides Congress with objective analyses to assist with economic and budgetary decisions.

Instead, the AP targeted a slip of the tongue by the President while visiting a Cleveland suburb this week.  Obama accidentally said 3,000 percent instead of $3,000: “Your employer, it’s estimated, would see premiums fall by as much as 3,000 percent.”  This error was later clarified by a White House representative.

The article also discussed conclusions from the CBO report that premiums would raise by 10 percent to 13 percent for individuals who purchased their own plans compared to expected increases without health care reform.  It went on to suggest that the use of this statistic is somewhat insidious.  “That’s mainly because policies in the individual insurance market would provide more comprehensive benefits than they do today,” Alonso-Zaldivar wrote.

However, immediately following the release of the CBO analysis back in November, Pfeiffer blogged about this exact point: “So let’s be clear: where the CBO does see premiums rising, it’s not because Americans are paying more for the same coverage––it’s that they’re making a choice to purchase better plans that weren’t previously available to them.”

In response to the AP story and in another attempt to clarify, Pfeiffer once again addressed the point head on, writing, “But wait, maybe you’ve heard opponents saying that CBO actually found that premiums would go up? Again, the facts matter here. CBO assumes that under the President’s Proposal individuals purchasing coverage in the reformed individual market will have access to a wider range of health benefits than they have in today’s individual market. So people may choose to buy better coverage.  Some may pay more because they are getting more for their money.”

In essence, both parties make the same argument, funnily enough based on the very same facts. So this is clearly not so much a case of inaccurate fact checking, because Alonso-Zaldivar does have his facts straight. Is what we are witnessing here merely exchanges of spin?

iMediaEthics has reached out to the Associated Press and is waiting for a response. A CBO representative insisted on maintaining the company’s impartiality and declined to comment in a phone conversation.