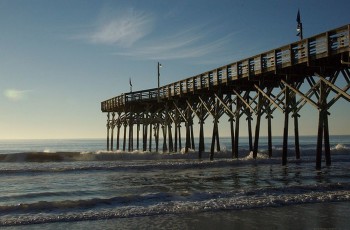 The article was published on the site NewsWatch 33. Its link now re-directs to the NewsWatch 33 homepage, suggesting it was unpublished.  A Google cache of the article shows just a headline and an image, with no story.

However, the Myrtle Beach Sun News reports the article claimed

“The teens were said to have been wearing anti-Confederate flag T-shirts, according to the article. The article further states that the group of white supremacists was taken into custody. The article is accompanied by what appears to be a cell phone photograph taken during Memorial Day weekend near Landmark Resort while a traffic loop was in place on Ocean Boulevard.”

If the fake story were true, the alleged crime would have occurred just weeks after the shooting deaths of nine at Charleston, South Carolina church Mother Emanuel Hope AME Church, just a couple hours drive south of Myrtle Beach.

“We have received several calls regarding a news story that has been circulating through social media today.

“If you have seen the story or headline of ‘Independence Day Massacre: 2 Black Teens Beaten To Death By White Supremacists, 1 In Critical Condition’ that occurred in Myrtle Beach, this story is false and did not occur.

“Please continue to have a safe and fun week!”

Myrtle Beach city spokesperson Mark Kruea added to CarolinaLive.com that “there’s not reason for that (story) to exist, it’s false, it’s made up. I can’t explain it.”

“The false posting of that story defies explanation.  It is completely fabricated, but for what purpose?  We are puzzled and baffled why anyone would create a fake news story, especially one claiming that such a horrible event had occurred, on a fake news site.  Who thinks like that???  We can divine no logic or justification for such a bizarre use of the Internet.”

The NewsWatch 33 website “was created on June 18 through GoDaddy.com, according to a domain search online, the Myrtle Beach Sun News reported.

The first four headlines on its homepage read:

“NewsWatch33.com is a news platform covering major current events. Most of these events are truthful with a shock factor. We do not represent any media outlet other than NewsWatch33.com. Keep in mind that any article found on our site is not intended to incite violence, hate, or any criminal act, nor does it represent the  views of any persons or organizations.”

iMediaEthics has written to the Myrtle Beach police department and NewsWatch 33.