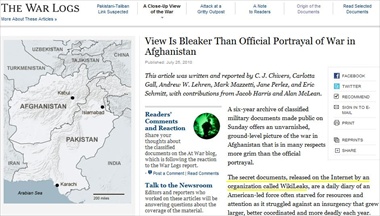 While it’s openly an advocacy and whistleblower safe haven, WikiLeaks has also caused a stir by crossing into gray journalistic territory.

But, with WikiLeaks’ July 25 publication of its Afghan war diary – a collection of secret U.S. military documents from the war in Afghanistan–WikiLeaks provided three mainstream news organizations with an advance review.  By doing so, the news organizations were first to publish about the data dump, and WikiLeaks was thrust into the forefront of the media conversation for weeks.

WikiLeaks published the 70,000 + documents, named the Afghan War Diary, July 25.   According to WikiLeaks, the diary consists of secret documents dating from 2004 to 2010.  “The reports, while written by soldiers and intelligence officers, and mainly describing lethal military actions involving the United States military, also include intelligence information, reports of meetings with political figures, and related details,” WikiLeaks wrote.

Three news organizations– The New York Times newspaper, UK’s the Guardian newspaper, and Germany’s Der Spiegel magazine – received advance review of the documents, under the condition that they didn’t publish any stories until July 25.

By linking up with the news organizations, editorsweblog’s Stefanie Chernow explained that “Wikileaks has created a forum for the war, with the assistance of the top newspapers who act to check validity.”

But UK’s The Telegraph’s  Will Heaven questioned Wikileaks’ agenda by picking those three organizations.  “It doesn’t strike me – or many of my colleagues – as politically neutral to feed such sensitive information to three left-leaning newspapers: namely The Guardian, The New York Times, and Der Spiegel,” Heaven opined.

Either way, the relationship was mutually beneficial — the newspapers got the scoop and WikiLeaks got the press attention. Editorsweblog’s Emma Heald wrote that WikiLeaks’ Afghan war diary earned credibility by giving advance exclusive information to the news organizations.

“People who may not have had faith in WikiLeaks would have trusted the information because it came from well-respected publications,” Heald wrote.

New York University’s Jay Rosen blogged that the Afghan diary’s publication was particularly effective because it was concurrently published both by WikiLeaks and by the newspapers:  “The information is released in two forms: vetted and narrated to gain old media cred, and released online in full text, Internet-style, which corrects for any timidity or blind spot the editors at Der Spiegel, The Times or the Guardian may show.”

That also made the three news organizations accountable for what they left out of their reports on the documents.

Assange said he picked Der Spiegel, The Guardian, and the New York Times because they are “the best newspapers in the world for investigative research,” according to Journalism.co.uk. He also said that for the next collaboration, he hopes to  collaborate with a TV network.

Assange said last October that working with a news site or other organization under embargo gets WikiLeaks’ leaks publicized.  If WikiLeaks just publishes something without a news story about it, then people don’t pay much attention.

“It’s counterintuitive,” Computer World reported Assange said. “You’d think the bigger and more important the document is, the more likely it will be reported on but that’s absolutely not true. It’s about supply and demand. Zero supply equals high demand, it has value. As soon as we release the material, the supply goes to infinity, so the perceived value goes to zero.”

Twenty-four-hour TV news channel CNN-IBN reported that by feeding the documents to the newspapers, WikiLeaks got the three papers to act as fact checkers and “well-recognized stamps of approval for the quality of the information.”

The New York Times wrote July 26 in an editors’ note that all three news outlets decided against publishing any names of field operatives and informants. The Times didn’t link to the archives “at the request of the White House. ”  TheTimes “also urged WikiLeaks to withhold any harmful material from its Web site.”

The Guardian’s July 25 article on the Afghan War Diary described the documents as offering “a devastating portrait” of the war, giving  “a blow-by-blow account of the fighting over the last six years, which has so far cost the lives of more than 320 British and more than 1,000 US troops.”

“We strongly condemn the disclosure of classified information by individuals and organisations, which puts the lives of the US and partner service members at risk and threatens our national security. Wikileaks made no effort to contact the US government about these documents, which may contain information that endanger the lives of Americans, our partners, and local populations who co-operate with us.” small amount of information has been withheld from publication because it might endanger local informants or give away genuine military secrets. Wikileaks, whose founder, Julian Assange, obtained the material in circumstances he will not discuss, said it would redact harmful material before posting the bulk of the data on its ‘uncensorable’ servers.”

“The United States strongly condemns the disclosure of classified information by individuals and organizations which could put the lives of Americans and our partners at risk, and threaten our national security. Wikileaks made no effort to contact us about these documents — the United States government learned from news organizations that these documents would be posted. These irresponsible leaks will not impact our ongoing commitment to deepen our partnerships with Afghanistan and Pakistan; to defeat our common enemies; and to support the aspirations of the Afghan and Pakistani people.”

However, NPR’s David Folkenflik wrote July 31 that Aftergood noted that in the case of the Afghan documents, WikiLeaks did consider safety by asking Der Spiegel, The Guardian and The New York Times to “review the authenticity and import of the documents it intended to publish.”  And, the story is “a matter of true public interest.”

And many are saying that the reports aren’t that significant either.  Which is it?

Yes Magazine wrote July 27 that “What they are trying to do is to have it both ways: claiming that disclosure of the reports somehow endangers U.S. troops, but at the same time disparaging the documents as showing nothing we didn’t already know.”

Shashank Bengali wrote for McClatchy Newspapers that “the papers made a splash by devoting large amounts of space to material that revealed little or nothing new about the war and consisted mostly of low-level reports that are impossible to verify.”

But, just because the three news outlets did work with WikiLeaks in this publication, WikiLeaks doesn’t all of a sudden have partners.

The New York Times’ executive editor Bill Keller told NPR that WikiLeaks was a source, and that’s it.

“First of all, I don’t call it a collaboration or alliance because that suggests some shared purpose, and it suggests they had some involvement in what we did with the material, which they did not. They were a source.”

NPR reported Keller said that the Afghan documents “were newsworthy because they provide texture and heft to earlier reporting about Afghan civilian deaths and ties between Pakistani intelligence and the Taliban.” And that even if news organizations didn’t report on them, Wikileaks would have published them.

“WikiLeaks doesn’t need The New York Times or The Guardian,” Keller said. “It has the ability to publish and circulate its stuff around the world … instantaneously.”

NPR reported July 30 that White House Press Secretary Robert Gibbs said “we can do nothing but implore the person that has those classified, top secret documents not to post anymore.” Gibbs said that a Taliban spokesperson said the Taliban is searching the documents to find out names of informants and intends to punish.

Adm. Mike Mullen, chairman of the Joint Chiefs of Staff, said at a press briefing that “Mr. Assange can say whatever he likes about the greater good he think he and his source are doing, but the truth is they might already have on their hands the blood of some young soldier or that of an Afghan family.’

Mullen tweeted July 27 that he was “Appalled by classified docs leak to Wikileaks & decision to post.” He tweeted two days later that  “Meant what I said: Mr. Assange & his source might already have on their hands the blood of our troops or that of our Afghan partners.”

Likewise, five human rights organizations have e-mailed a letter to WikiLeaks to express concern for the safety of anyone identified in the documents.

“We strongly urge your volunteers and staff to analyze all documents to ensure that those containing identifying information are taken down or redacted,” the letter reads.  The Wall Street Journal reported that Assange has responded to the letter suggesting the five groups -Amnesty International, Campaign for Innocent Victims in Conflict, Open Society Institute, Afghanistan Independent Human Rights Commission and International Crisis Group’s Kabul office –  aid WikiLeaks in the removal of those names from the documents.

iMediaEthics, as we stated in Part I of our report, thinks this redaction should have been done before publication. Especially considering that many of the documents are years old (back to 2004), WikiLeaks could have waited for vetting to reduce the risks and potential cost of lost human life.