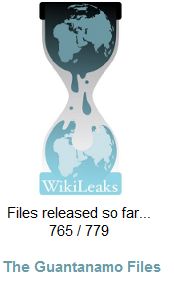 WikiLeaks’ has published its latest bulk leak,  this time nearly 800 secret documents out of Guantanamo Bay. As with past big leaks, this one has a nickname — “The Guantanamo Files.”

Interestingly, a December UK Sunday Times report indicated that the Guantanamo Bay documents are part of the “insurance file” that Assange has posted on WikiLeaks in case anything happens to the site or him.

The Sunday Times reported that the insurance file also contains documents on BP, the oil company responsible for the massive oil leak in the Gulf of Mexico.  If the Times is correct, why is Julian Assange giving up his insurance file now? The Times does not say.

Since WikiLeaks’ last big leak publication — that of U.S. diplomatic cables grouped as “Cablegate” — WikiLeaks has lost its main web address (wikileaks.org) and courts have approved an extradition order for WikiLeaks founder Julian Assange to Sweden related to rape accusations.  Notably, WikiLeaks claims it has only published about 3 percent of its Cablegate documents since November.

The leak consists of 759 Guantanamo prisoner records and also includes “whereabouts of Al Qaeda leaders on September 11th and in the days following the 9/11 attacks.”

According to the Times, “no new prisoners have been transferred to Guantánamo since 2007.”

The New York Times added that “much of the information in the documents is impossible to verify” and that the documents aren’t complete since there are about 75 more detainees without records in the WikiLeaks files.

The Guardian and the New York Times had to obtain their version of the documents secondhand from another source.

Before Cablegate, both newspapers, along with Germany’s Der Spiegel, were allowed advance access to WikiLeaks documents prior to publication for the leaks of documents from the Afghan war and the Iraq war.

Even though WikiLeaks refused to give the NY Times documents for its Cablegate leak last November, but the Guardian gave them a copy. WikiLeaks added Le Monde and El Pais to its list of media organizations provided documents with in advance of release.

The New York Times got a copy from an anonymous source and then gave it to the Guardian and NPR, Journalism.co.uk reported

Times Gets Docs from Anonymous Source

The New York Times didn’t identify its source for its copy of the Guantanamo documents, but WikiLeaks suggested that source may be former WikiLeaks worker Daniel Domscheit-Berg.  It appears April 24th’s publishing may have been a bit of a crunch time effort for some of the news organizations.

According to the Huffington Post’s Michael Calderone,

“NPR and the Times had planned on posting stories Sunday night, but ended up publishing a bit earlier than expected after The Telegraph jumped out of the gate with its piece just after 8 p.m. EST.”

In an April 24 tweet, WikiLeaks seems to support that idea and name Domscheit-Berg as the Times’ source. WikiLeaks wrote:

“Domschiet, NYT, Guardian, attempted Gitmo spoiler against our 8 group coalition. We had intel on them and published first.”

Domscheit-Berg notably left WikiLeaks last September and published a book in February about his experience at WikiLeaks working with Assange, Inside WikiLeaks.  The WikiLeaks tweet indicates that the Times/Guardian/NPR union decided what the publication date would be — not WikiLeaks and Julian Assange, as Gawker noted. According to Gawker, WikiLeaks has had the Guantanamo documents “since at least May of last year.”

According to Calderone, the New York Times contacted NPR “a few weeks ago” letting it know that it had gotten a copy of the Guantanamo documents.

New York Times executive editor Bill Keller, who has distanced the newspaper from WikiLeaks and Julian Assange, is quoted as saying “WikiLeaks is not our source. We got the material with no embargo.”

WikiLeaks has sent out numerous tweets since the Guantanamo Bay documents started being published.  In the tweets, WIkiLeaks asserted that the Telegraph published “before NYT or Guardian” and asked for financial support.

WikiLeaks also tweeted a bit of a mixed message:  “We are pleased that the NYT, Guardian & NPR eventually added their weight to increasing our impact, regardless of the intent of some.”

Before publishing the Guantanamo documents, WikiLeaks tweeted to say “WikiLeaks is pausing from its regular publishing for a week while we deploy additional capacity.  Happy holidays!”  StinkyJournalism assumes that means the publication of the Cablegate documents.

David Leigh on Guardian and WikiLeaks

According to Journalism.co.uk, the Guardian’s investigations editor, David Leigh, commented about being let out of the WikiLeaks-approved group:

“This is all because of Julian Assange’s feuding with the Guardian and the New York Times, and what he’s decided to do now is cut us out of it and distribute the files to a range of right-wing newspapers, including the Telegraph.”

Leigh added:  “Well, when people try and double-cross you, that probably is the end of a relationship.”

Leigh denied that Assange is suing the Guardian over its book, WikiLeaks: Inside Julian Assange’s War on Secrecy.  Assange has reiterated those claims as recently as this month.  Assange also reportedly threatened to sue the newspaper in November 2010 because the Guardian had gotten a copy of the Cablegate documents and intended to publish outside of its embargo agreement with WikiLeaks.

In response to those lawsuit claims, Leigh stated: “We’ve received no writ, no lawsuit, nothing. Every time Assange gets asked an awkward question he deflects it with this stuff about suing us, but it’s not true.”

As of mid-day April 25, WikiLeaks has published 105 of the 779 document files. WikiLeaks stated it intends to publish the remaining documents “over the coming month.”   Meanwhile, Wikileaks has only published  7,579 files of 251,287 documents related the CableGate leak. As of late Deecember, WikiLeaks had published almost 2,000 of those files.

Following the start of Cablegate publishing, WikiLeaks site was on and off again available due to Distributed Denial of Service attacks on its site. Eventually, WikiLeaks.org moved domain names to WikiLeaks.ch.  Numerous sites are also hosting WikiLeaks mirror versions.

In WikiLeaks’ statement on its website introducing the leak, WikiLeaks labeled some people cited in the documents as “unreliable witnesses.”  As WikiLeaks explained,

“The documents draw on the testimony of witnesses — in most cases, the prisoners’ fellow prisoners — whose words are unreliable, either because they were subjected to torture or other forms of coercion (sometimes not in Guantánamo, but in secret prisons run by the CIA), or because they provided false statements to secure better treatment in Guantánamo.”

In a tweet, WikiLeaks again advised “extra caution” when reading “Confessions” in the documents.

The Guardian features an “interactive guide to all 779 detainees” on its website here. The Guardian explained that the Times received the documents and passed them on to the Guardian and NPR.  The Guardian added that it redacted identifying information.

The Pentagon has responded to the leak with the following statement:

“Naturally we would prefer that no legitimately classified information be released into the public domain, as by definition it can be expected to cause damage to US national security. The situation with the Guantánamo detention facility is exceptionally complex and releasing any records will further complicate ongoing actions.”

The Guardian reported that U.S. officials have commented that the leak is “unfortunate” and that WikiLeaks got the documents “illegally.” Geoff Morell, the Pentagon’s press secretary, stated:

“These documents contain classified information about current and former GTMO detainees, and we strongly condemn the leaking of this sensitive information.”

Morell also noted: “The assessments of the Guantánamo Review Task Force have not been compromised to Wikileaks. Thus, any given DAB illegally obtained and released by Wikileaks may or may not represent the current view of a given detainee.”