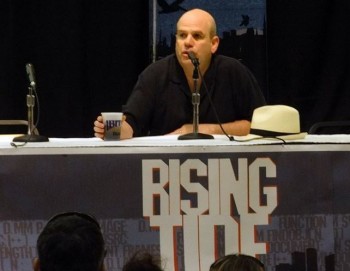 The Huffington Post corrected a blogpost that wrongly stated The Wire creator David Simon was fired from the Baltimore Sun.

The blogpost was written by Linda Williams, who also has written a book about The Wire, a popular show on the Home Box Office network.

Simon accused the post and book of libel for wrongly saying he was fired from the Sun in the ’90s. In a statement on his website this week, he said he took a buyout and was even offered a raise to stay. (See iMediaEthics’ report about Simon’s claims that the blogpost and book libeled him.)

The correction on Williams’ Huffington Post article is undated but was likely posted July 4 given that the blogpost’s date stamp says “Updated: 07/04/2014 8:59 am EDT.” The correction reads:

“Correction: This post stated incorrectly that David Simon was fired from the Baltimore Sun. The author apologizes to Mr. Simon for the error.”

Along with the correction, the article has been changed to remove the claim that Simon was fired. The Huffington Post article originally stated:

“Thus did David Simon have his sweet revenge on the bosses who once fired him from the Baltimore Sun for not himself producing more facile, ‘Dickensian’ stories.”

The blogpost has been changed to read:

“Thus did David Simon have his sweet revenge on the bosses who once killed his story on metal scavingers [sic] at the Baltimore Sun because his writing was not ‘Dickensian’ enough.”

He said that the updated text in the blogpost about his article being killed was also incorrect, but he indicated he was letting the matter go.

“They never said anything of the sort to me or anyone else, and that is not actually the reason that particular article was spiked,” he wrote. “I carefully related the actual sequence of events to Dr. Williams in my April memo as a discussion of  that particular article and its fate features throughout her manuscript, but no matter.”

He added, “With regard to the Huff Post essay at least, I am libeled no more and I thank the author for her apology at the bottom of the essay.”

Simon further commented about the Huffington Post and its response to his complaints about the blogpost, which he characterized as “non-performance.”

He criticized the Huffington Post for its “abdication of editorial responsibility.” He wrote:

“The abdication of editorial responsibility in the case of aggregated sites such as Wikipedia or barely-edited copy dumps such as the Huffington Post is one of the sad retrenchments in news distribution and commentary.  The ethos of such entities — hey, we don’t write the stuff; we’re just the blackboard it’s scrawled upon —  sounds at first to be an ennobled argument for an open and unfettered marketplace of ideas, where some unseen hand of libertarian idealism ensures that better notions triumph over bad ones, and the lies are all, in the end, run down and brutalized by more powerful truths before much harm is done.”

Further, he likened its publication system to yellow journalism, writing “Lies and cheap provocations become as essential to the dynamic as the truth, and accuracy and falsehood are accorded equal honor.  It’s yellow stuff indeed.”

“Instead, the editors of the Huffington Post are not only untroubled at the thought of unknowingly participating in a libel, they prove comfortable with maintaining that libel even when its falsehood is known.  They throw up their hands, cry that we shouldn’t shoot the piano player, who’s merely playing the music of others.  As if carrying a lie about another citizen to a mass of people isn’t still the tort of libel and a thoroughly scumsucking thing with which to be engaged.”

iMediaEthics has reached out to the Huffington Post for a response.