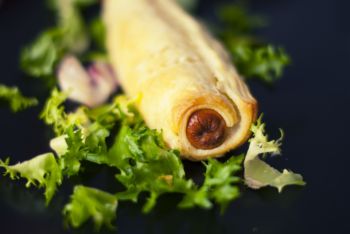 New York Times reporter Ben Widdicombe reported that actress Rachel Brosnahan, known for The Marvelous Mrs. Maisel, “eyed but did not touch a passing tray of pigs-in-blankets” at an after party for the Golden Globes.

Widdicombe later tweeted that Brosnahan’s PR representative complained that the actress did no such thing. And, further, she wanted a correction. Now, the Jan. 6 article no longer mentions the pigs-in-blankets, and carries this correction:

“An earlier version of this article described imprecisely what the actress Rachel Brosnahan ate for dinner at the Golden Globes and misstated what she saw at an after-party. Ms. Brosnahan had mushroom scallops and rice at the dinner, and she did not see trays of hors d’oeuvres being served at the party.

iMediaEthics wrote to the Times to ask how it determines to grant a correction in this matter if its own reporter reported what he saw, but the representative denies that is what happened. The Times declined to comment beyond the correction.

Widdicombe tweeted about the matter:

“Got hit w/ a NYT correction today because I wrote an actress at a Golden Globes after-party “eyed but did not touch a passing tray of pigs-in-blankets.” Her PR objected & the correx reads: “she did not see trays of hors d’oeuvres being served at the party.” Might frame that one.”

Brosnahan tweeted in response to questions about the story,

“In arguably the strangest thing I’ve been asked to fact check, no. We were on the carpet&much to my dismay they don’t feed you on those. But we did chat about climate change+steps we can take to ensure a brighter future for all of us..and this is what got printed. So there’s that”