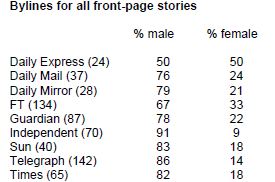 Women in Journalism, which identifies itself as a “networking, campaigning, training and social organisation for women journalists,” studied UK newspapers from mid-April to mid-May to survey women’s presence on the front page.

According to the Oct. 15 report, the group’s research focused on “the front pages from all the major national daily (Monday to Saturday) and Sunday newspapers for a four-week period (from Monday 16 April to Sunday 13 May 2012, inclusive.”  The newspapers in question were

Women in Journalism noted it “analysed in the same way” nine Sunday newspapers but ended up not using that research “because, on reflection, we decided that just four editions of each Sunday paper (because the research was restricted to a four-week period) was not a big enough sample to draw meaningful conclusions.”

Overall, the research “found that 78% of all front page bylines were male; 22% were female.”  In terms of balance, the Daily Express had a 50-50 split in male/female bylines on the front page, whereas the UK Independent had 91% male, 9% female. According to the report, the Financial Times “had one of the highest byline counts for women, with a third of its 134 front page bylines being female.”

As news subjects, Women in Journalism reported “of all those quoted or mentioned by name in the lead stories, 84% were men, and just 16% women.”  Further, “three-quarters of ‘experts’…were men; and 79% of ‘victims’ were women.”  The research report noted that for characterizing the way genders were represented, it only counted “the first named person mentioned or quoted in each lead story.”

Concerning photos, the Women in Journalism report found that “out of a total of 808 photos of people, women accounted for 36%; men, 50% (the remaining 14% would have been mixed groups or where the gender was unclear.” Kate Middleton was the most photographed “as the main photo on a front page,” and her husband, Prince William, and her sister, Pippa Middleton, were tied for the fifth most photographed.

According to the research report, “seven out of the 10 people” most photographed were men, and were pictured for “generally strong news-related reasons” like politics.  But “for the Middleton sisters, the wearing of a new hat or a new dress could be enough to prompt a lead front page picture, in a way that would be unlikely to be the case if, say, Prince William or Harry stepped out in a new tie.”

Check out the full report

iMediaEthics is writing to Women in Journalism for more information.

iMediaEthics wrote to Women in Journalism asking about any cmapaigning the group does and any future projects.  Kate McMillan, the WIJ administrator, told iMediaEthics by email that

“We are looking to take this forward by producing an expert contact directory for all fields science, education, health, travel, everything really – so there exists one place where people who are searching for an expert can find them quickly and easily. The wij committee has a lot of experts that they can call on already – so it would really be just a question of building it into all fields.

“However in order to do this we need sponsorship  to help fund its set up and running costs. It would be a UK directory at this stage.”