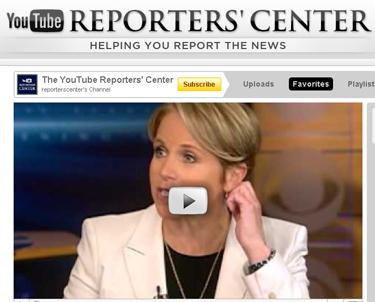 YouTube, along with “several top news and media organizations,” have formed a “dedicated channel that features how-to videos on news reporting.”

The press release describes a “one-stop-shop for journalism training online, the YouTube Reporters’ Center covers a wide range of topics, from preparing for interviews, to fact-checking, to journalistic ethics.”

Recognizable journalists have made special videos–I have included my comments in parenthesis. Names such as as Katie Couric, CBS Evening News (perky, not very helpful) , Michael Isikoff, Investigative Correspondent, Newsweek (boring–seems like he would rather be doing something else) and Arianna Huffington, Editor-in-Chief, The Huffington Post (stiff-as-board, not-used-to cue-cards delivery) are on the list, as well as citizens in media-related organizations, such as The Citizen Media Law Project and Witness.

Media company employees, such as Dean Wright, Global Editor, Ethics, Innovation and News Standards, Reuters, speak outside any role they may play as public lightning rods during ethics crises, as they address issues of standards in their videos. (Wright’s training video was the best of the four I viewed).

Wright’s video description states that Wright “talks about how to earn the trust of your audience and stick to the basic principles of honesty, fairness and pursuit of the truth.”

The YouTube channel also solicts submissions from individuals or media outlets that may have something to say that will “help others report the news.”