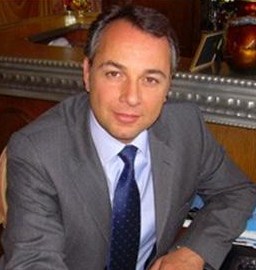 Philippe Karsenty, pictured, is the director of a French media watchdog site. He just won a libel suit, which followed his critique of a 2000 France 2 TV video. (Credit: Middle East Quarterly)

Another twist has been added to the decade-long debate over the “al-Dura” video broadcast by France 2, a national public television network. French mediia watchdog journalist Philippe Karsenty has won a libel suit following his criticism of the video.

The dramatic video from 2000 sowed the alleged death of a 12-year-old Palestinan boy named Mohammed al-Dura.  As Atlantic Monthly wrote in June 2003, the image of al-Dura “shot dead in his helpless father’s arms during an Israeli confrontation with Palestinians has become the Pieta of the Arab world.”

The al-Dura video spread throughout the media calling the boy’s death a result of crossfire or more specifically Israeli crossfire, Atlantic Monthly reported. After examining the video, people eventually had questions.

In 2000, Charles Enderlin of France 2 gave the “voiceover” for a video of the Israeli-Palestinian conflict. The tape was shot by cameraman Talal Abu Rahma.

Israel National News reported that the “original France 2 report claimed that al-Dura was killed by Israeli gunfire; a subsequent investigation by Israel and additional footage showed the boy lifting his head, opening his eyes and lifting his arm after being pronounced dead. Though France 2’s Charles Enderlin said that these were was just the boy’s death throes, others said the boy was actually peeking at the camera in what was actually an elaborate ruse.”

Israel National News noted evidence for the tape being inaccurate including no proof that Israeli soldiers shot the boy and no proof that the boy died.

Enderlin is Jerusalem-based and one of France 2’s bureau chiefs.   According to the Web site Camera (Committee for Accuracy in Middle East Reporting in America), Enderlin said that “Mohammed is dead” in the video.

Philippe Karsenty is the founder and director of the French media watchdog site Media-Ratings. In Nov. 2004, Karsenty called the report a hoax, and as a result was sued for defamation by Charles Enderlin and France 2.

Enderlin and France 2 won the lawsuit in 2006.  But an appeals court acquitted Karsenty in Feb. 2008, the AFP reported, and the defamation charge was reversed. .

In the latest twist, Israel National News reported June 14 2010  that “in the week’s preceding the Paris Court of Appeals’ decision,” Canal + aired a documentary on the Karsenty case.”

Stéphane Malterre made the documentary in 2008 for the company CAT PRESS, according to a Google Translate of Causeur’s June 10 article. Karsenty filed the libel suit because the April 24, 2008, documentary was released very close to his verdict date: May 21, 2008.

“The documentary accused Karsenty of manipulating information to support the ‘radical and extremist’ perspective that the broadcast of Mohammed Al Dura’s death on France 2 was staged,” CAMERA wrote July 15.

A Google Translate of the June 10 Causeur article reported that Canal + and CAT PRESS were found guilty of defamation because Stéphane Malterre had information that cast doubt on al-Dura’s death before his report aired, but he didn’t include it.

Camera dissected the “anatomy of a French media scandal” in Oct. 2005 and with an update in April 2009.

StinkyJournalism reported June 12, 2008 when the Wall Street Journal, unlike most mainstream media at the time, reported on the questioning of the al-Dura story’s authenticity.

StinkyJournalism wrote a second story Feb. 17, 2009 when France 2 was again accused of faking a story when reporting on the conflict in the Gaza Strip.