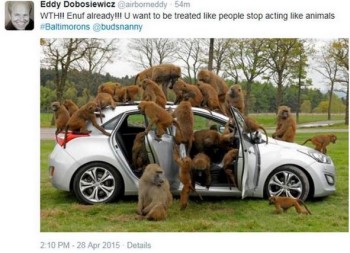 This tweet on the Baltimore protests over Freddie Gray's death got Eddy Dobosiewicz suspended from two TV stations.

His tweet showed a picture of a car with monkeys climbing all over and inside of it. The caption he wrote stated: “WTH!! Enuf already!!! U want to be treated like people stop acting like animals #Baltimorons @budsnanny.” Ad Week’s TV Spy posted a screenshot of the tweet.

Dobosiewicz added “I’m thinking that Baltimore has been overcome by animals what r u thinking? #Baltimorons”

@buffalopundit I’m thinking that Baltimore has been overcome by animals what r u thinking? #Baltimorons

WKBW’s general manager Michael Nurse called Dobosiewicz’s comments “insensitive, inappropriate and harmful,” in an e-mail to iMediaEthics. For WKBW, Dobosiewicz provides a “nostalgia segment” for newscasts, according to the Buffalo News.

WBBZ’s general manager Chris Musial added “It’s just inappropriate, insensitive comments by Eddy that led us to take this step.” At WBBZ, he has a program called Off Beat Cinema, the Buffalo News stated.

Dobosiewicz  argued his post was comedic, “in a sarcastic way,” and “out of context.” He also said he isn’t racist and works in “the area of the city that has the most African-Americans.”

“My intention was not to offend any one particular group of humans,” Dobosiewicz told the Buffalo News, adding that he wanted to “kind of jolt everybody into reality.” Dobosiewicz apologized for “causing any upset to anyone.”

Dobosiewicz next blogged about the incident admitting “Boy did I screw up.”

“I screwed up. I posted a photo of monkeys on social media and likened it to the Baltimore riots. And for that, I am completely, unequivocally and absolutely sorry. No ifs. No ands. No buts. Just: I apologize because I was wrong.”

“I did something stupid,” Dobosiewicz wrote of his tweet.

After tweeting, “the backlash started immediately.” As a comedian, he said his automatic response to critics was to avoid apologizing and “push[ing] back.”

“Soon, I realized that what I had done was being interpreted as a racist post. I didn’t intend it to be racist, but when I look back on it, I know: monkeys are not an appropriate way to represent African Americans. It’s flat-out racist.”

iMediaEthics has reached out to Dobosiewicz and the two stations for comment.