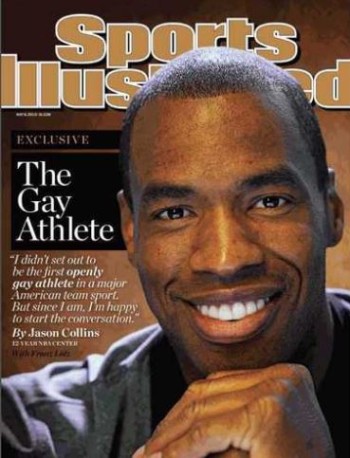 Washington Wizards pro basketball player Jason Collins announced in a very high-profile May 6 Sports Illustrated cover story this week that he is gay.

And within a few days of Collins’ story being published online, there have already been two media ethics issues that have grabbed iMediaEthics’ attention — Howard Kurtz of the Daily Beast’s giant error in criticizing Collins for not admitting he was once engaged to be married to a woman, and ESPN reporter Chris Broussard’s calling homosexuality a “sin” but denying it would affect his coverage of Collins.

Kurtz’s error has gotten even more attention because a day after his report, The Daily Beast’s editor-in-chief Tina Brown tweeted he was no longer with the Daily  Beast.

iMediaEthics asked the Daily Beast for confirmation and comment about the news, including if Kurtz was leaving because of the Collins blogpost.  The Daily Beast’s Andrew Kirk gave iMediaethics the statement from Tina Brown, which didn’t answer our question and, instead, seems to be a self-serving advertorial:

“The Daily Beast and Howard Kurtz have parted company. Under the direction of our newly named political director John Avlon we have added new momentum and authority to our Washington bureau with columnists such as Jon Favreau, Joshua Dubois and Stuart Stevens joining our outstanding DC team of Eleanor Clift, Daniel Klaidman, Michael Tomasky, Eli Lake, David Frum and Michelle Cottle – giving us one of the best politics teams in the business which was instrumental in this week’s Webby win for Best News site.”

Howard Kurtz erred in his report on Collins because he accused Collins of not revealing in his coming-out essay that he was once engaged. Kurtz said in his Daily Beast article that Collins “left one little part out” in his article.

But Collins did, saying in the Sports Illustrated article:

“When I was younger I dated women. I even got engaged.”

Collins also discussed his engagement during an interview this week with ABC News, The Huffington Post added.

“An earlier version of this story erroneously said that Collins had not mentioned his engagement in his Sports Illustrated essay.”

Kurtz also apologized in an email to BuzzFeed saying in part that “I don’t think my analysis was out of bounds.”

Today, The Daily Beast retracted Kurtz’s blogpost, according to The Atlantic Wire. The Daily Beast’s retraction admitted to Kurtz’s “several errors, resulting in a misleading characterization” of Collins.

“The Daily Beast sincerely regrets Kurtz’s error — and any implication that Collins attempted to hide or obscure the engagement,” the retraction added. Kurtz’s blog post on Collins now links to the retraction statement.

Gawker added that Kurtz also made the error in a video segment for the Daily Download, which Gawker published on its website.

iMediaEthics wrote back in 2011 when Kurtz fessed up to not admitting to a significant error in a Daily Beast story for more than six weeks.  In an article that was published Nov. 27, 2010,  Kurtz reported on his interview with U.S. Representative Darrell Issa (R-CA). BUT, Kurtz didn’t interview Issa — he had interviewed a spokesperson and wrongly thought, or so he said, that he had spoken with Issa.  Even though Issa’s spokesperson, Kurt Bardella, told Kurtz Nov. 29 that he had actually interviewed him not Issa, Kurtz didn’t get around to correcting the article until January.

Broussard had said that he doesn’t “agree with homosexuality,” which he described as a “sin.” A video clip of Broussard’s comments is published on the Los Angeles Times’ website.

In a statement published by the Los Angeles Times, ESPN said “We regret that a respectful discussion of personal viewpoints became a distraction from today’s news. ESPN is fully committed to diversity and welcomes Jason Collins’ announcement.”

As well, Broussard said he was giving his “personal opinion as it relates to Christianity” and that “some people disagree with my opinion.”  Despite his stated beliefs against Collins, Broussard denied he would let it affect coverage, saying: “As has been the case in the past, my beliefs have not and will not impact my ability to report on the NBA. I believe Jason Collins displayed bravery with his announcement today and I have no objection to him or anyone else playing in the NBA.”