21,000+ Complaints Over BBC's Jeremy Clarkson Comments for Striking Workers to be Shot

21,000+ Complaints Over BBC’s Jeremy Clarkson Comments for Striking Workers to be Shot 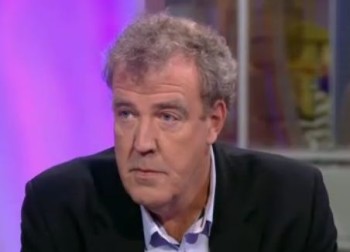 The BBC apologized after one of its hosts, Jeremy Clarkson, called for public sector workers on strike to be “executed in front of their families,” the Guardian reported.

The comments were made on Nov. 30’s episode of the BBC’s The One Show.  The BBC describes The One Show as a “live topical programme which often reflects the day’s talking points.” Clarkson hosts a car show called Top Gear for the BBC.

The BBC’s apology says: “The One Show apologised at the end of the show to viewers who may have been offended by Jeremy Clarkson’s comments.” The BBC also issued a statement saying “on this occasion we feel the item wasn’t perfectly judged.”

The Telegraph, however, reported that Clarkson said producers knew before the program about his intended comments and gave the OK.

Separately, a BBC host apologized for Clarkson’s comment that “trains shouldn’t stop” when someone steps in front of a train to commit suicide, according to NPR.

Clarkson said he didn’t “intend these remarks to be taken seriously,” according to the Associated Press. “If the BBC and I have caused any offense, I’m quite happy to apologize for it alongside them.”

In response to Clarkson’s comments, trade union Unison called for the BBC to fire Clarkson, according to a BBC report.

Unison’s general secretary, Dave Prentis is quoted by the BBC as calling Clarkson’s comments “totally outrageous, and they cannot be tolerated.”

According to the BBC, the UK Prime Minister, David Cameron, commented that Clarkson’s comments were “a silly thing to say” and that “I’m sure he didn’t mean it.” However, the UK Labour Leader, Ed Miliband, called for Clarkson to apologize.

The BBC noted Dec. 1 that more than 4,700 complaints have been filed over the comments.  By Dec. 2, the Telegraph reported that the number of complaints was up to 21,335.

The BBC published here a sampling of viewer responses to Clarkson’s remarks.

See here a video segment from the program.

21,000+ Complaints Over BBC’s Jeremy Clarkson Comments for Striking Workers to be Shot