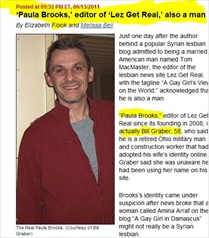 What are the chances that, in the same week, another American man would be outed for the same offense as Tom MacMaster, who was outed as the man posing online as fictitious lesbian blogger Amina Arraf of the blog “Gay Girl in Damascus?” Slim though the chances are, that’s exactly what has occurred.

An Ohio man named Bill Graber has admitted to using the fake online identity of a deaf lesbian woman Paula Brooks, an executive editor for lesbian site LezGetReal.com. The name Paula Brooks is real and that of Graber’s wife, who reportedly didn’t know that her husband was using her identity to pose as a lesbian woman online, the Washington Post reported.

LezGetReal.com is an actual (read: non-hoax) site whose writers were fooled by Graber’s deception. Graber as Paula Brooks has been editor of the site from his 2008 founding of the site until his real identity was revealed, according to Washington Post.

Linda Carbonell, LezGetReal’s managing editor, explained in a note to readers that LezGetReal’s writers weren’t skeptical of “Paula Brooks’s” identity since the “persona was successfully on-line for three years” before LezGetReal’s Bridgitte LaVictoire, who is now in charge of the site since Brooks’/Graber’s identity was outed, encountered Brooks.

And, Carbonell argued that one difference between the “Paula Brooks” fake identity and the “Amina Arraf” hoax is that Graber as “Paula Brooks” wrote “mostly non-fiction news items and stories” with a fictitious identity. But, MacMaster as “Amina Arraf” wrote stories presented as factual but ultimately fictional about how Arraf “did all sorts of dramatic and important things in the middle of a revolution in Damascus and became a news story carried around the world. ”

Months ago, Graber, posing as “Paula Brooks,” reportedly encouraged “Amina Arraf” to start a blog, but neither Graber nor MacMaster knew the other was really a man posing as a lesbian woman online. According to the Washington Post, Arraf and Brooks “often flirted” with each other online as well.

Bill Graber’s fake online lesbian identity, “Paula Brooks,” also was “exposed as a man masquerading as a gay woman” during the investigation into “Amina Arraf’s” identity, The Guardian reported June 14.

The Washington Post reported that Graber used his wife’s identity without her knowledge as he posed as Brooks and even sent the Post “a photograph of a driver’s license, which showed a woman named Paula Brooks.”

Graber reportedly explained to the Washington Post why he started posing as Brooks.  He stated he wanted to “write about gay issues after seeing the mistreatment of close friends who were a lesbian couple. He said the site was “done with the best of intentions.” He also said that, as a former Air Force pilot, he used the site to argue in favor of the “Don’t ask, don’t tell” repeal.”

LezGetReal’s Linda S. Carbonell issued an apology June 14 to LezGetReal readers.  She explained that the site removed its earlier apology “for our involvement with the ‘Amina’ hoax  because there were some comments in it that were based on information from Bill Graber.”

Carbonell stated she was “tricked into talking with the press, issuing defenses” and more.

She offered a timeline of LezGetReal’s interactions with Amina.  She said “last Februray” Arraf approached LezGetReal identifying herself as a Syrian-American young woman.  LezGetReal asked her to blog “about being gay and Muslim.”

“Our executive editor, the person we knew as Paula Brooks, helped ‘Amina’ set up A Gay Girl In Damascus, and carried her stories on our blog. We believed we were doing a service for the people in the Middle East who were and are fighting and dying for liberty. I have spent my entire life believing that liberty cannot be imposed by an occupying army and not all peoples will practice democracy the same way we do. That’s why I wanted her stories. And let’s face it – she’s a damned good fiction writer.”

Carbonell added that LezGetReal “didn’t even break the story” about the alleged kidnapping and that she personally did issue “appeals about Amina’s safety.”

“Were we used by this person? Yes. Did we believe her? Yes. Did we care what happened to her? Damn yes. And that’s what hurts so much. Did we lose sleep over Amina? Yes. Were we scared out of our collective minds? Yes.”

Carbonell went on to criticize MacMaster for distracting attention from real issues in Syria and for now causing some of those stories to be “dismissed … as hoaxes.”

“When the story broke about Amina actually being a man named Tom MacMasters, Bill Graber’s sockpuppet theater crashed around him and the staff of LezGetReal,” Carbonell explained.  “Bill had hoped to keep LGR out of it, but we got dragged in. He was already in the process of turning over the site to others and withdrawing the Paula Brooks character from the internet.”

She added that the site is “thoroughly furious” with Graber.