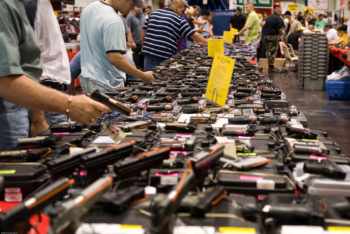 The Washington Post and Pew announced last week that only 15% of Americans were “angry” at the U.S. Senate’s failure to pass the gun bill that included required background checks for gun buyers. Another 32% were “disappointed,” for a total of just 47% who reacted negatively to the failed vote. Reacting favorably were 39% of Americans – 19% saying they were “relieved” and 20% “very happy.”

Those results led Josh Voorhees of Slate to suggest that the “window” of opportunity to enact stricter gun control laws – “created by a spike in public support for the background check provision, seen as the best bet for bipartisan common ground – may be closing fast.”

But, there are four main points in Voorhees’ commentary that reflect a misunderstanding of polls, American politics, and public opinion.

1. First, it’s important to recognize that a spike in public support for gun control, in the wake of the Sandy Hook Elementary School shootings, was not the catalyst that led to the Senate’s efforts to pass its gun control bill.

Widespread public support for background checks was measured by several polling organizations long before that shooting. What made the post-Sandy Hook shooting different was the reaction of many political leaders, including President Obama, who vowed to do something about gun violence.

2. Second, the spike in public support for gun control in general was at best mild, with about four in ten Americans strongly supporting stricter laws. There was slight to no spike in support specifically of background checks, which was already very high anyway.  Moreover, the spike in support came after President Obama and many other political leaders vowed to do something about gun violence, not before.

“Less than half of Americans surveyed suggested they were upset or unhappy about the Senate vote—a far cry from the 83 percent support for expanding background checks that the same pollster found as recently as February.”

“What word best describes how you feel about the Senate voting down new gun control legislation that included background checks on gun purchases?”

The question in the February Pew poll asked:

“Please tell me if you would favor or oppose making private gun sales and sales at gun shows subject to background checks?”

The two questions do not ask about the same policy – the February one focuses only on background checks, while the current question mentions “new gun control legislation” that also includes background checks.

As I wrote in an earlier post, there is much less public support for the general  idea of gun control legislation than there is for some specific proposals, like background checks. When the current Pew/Post poll included the general question about gun control, it nullified any comparison with the February question.  You can look at the Pew topline to see that Pew itself does not make such a comparison.

If anything, the window is closing (at least at the federal level) because of the actual filibuster vote in the Senate and the refusal of Republicans to allow an up-or-down vote on the issue itself.

If public support for background checks in the 80% to 90% range cannot move the Congress to support new legislation, then we need to look beyond public opinion as the cause.

iMediaEthics has written to Voorhees seeking a response to this criticism and will update with any response.