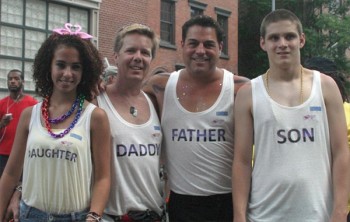 Several polls show that over the past three years, there has been a significant change in American public opinion in favor of gay marriage. Still, those same polls suggest that, at best, the country today is about evenly divided on the issue, with just a slight majority willing to accept gay marriages as legal with all the same rights as traditional marriages.

A new poll by iMediaEthics, however, reveals a great deal more public tolerance of gay marriage than what most news stories report. Instead of a highly polarized public, in fact about 7 in 10 Americans are “not upset” with gay marriage, including about a quarter of the public that is intensely supportive. This new Poll is part of iMediaEthics’ PollCheck project to fact check media polls.

See above, a comparison of polling results on gay marriage over the years.

Though all these polls show more people in favor of gay marriage than opposed, the absolute level of support is only at roughly the 50% level. The CNN poll, for example, reports 54% of the public with a favorable view, compared with 53% shown by ABC and the Washington Post, 50% by Gallup, 47% by Pew and 49% by NBC and the Wall Street Journal.

Large Majority of Americans “Not Upset” With Gay Marriage

The problem with these polls is that they treat all responses, even those obtained through “forced-choice” questions, as though each one represents a strongly anchored view. In fact, much public opinion research has shown that the intensity with which people hold opinions varies considerably, with many people giving an opinion when pressured to do so in a poll, but not really caring whether that opinion prevails.

To examine how intensely Americans feel about the issue, iMediaEthics commissioned its own poll, sponsored by the Golkin Foundation and conducted by SurveyUSA, which explicitly measures non-opinion and the strength of opinion among respondents expressing one. It was conducted June 4-6 and includes 893 adults from all 50 states. (See details of poll methodology here.)

For the first half of the sample, the specific question was:

“Based on what you’ve read or heard, do you think marriages between couples of the same sex should or should not be recognized by the law as valid, with the same rights as traditional marriages?”

The results are shown in the graph below, along with results of other recent polls asking a similar forced-choice question.

Note that the iMediaEthics poll using the forced-choice format finds a 12-point margin in favor of gay marriage, close to the same margins as three other recent polls (CNN/ORC, ABC/WP, and NBC/WSJ). Pew and Gallup report smaller margins of support.

(Note: President Obama announced on May 9 that after much thought, “I’ve just concluded that for me personally, it is important for me to go ahead and affirm that I think same-sex couples should be able to get married.” The iMediaEthics, CNN/ORC and ABC/WP polls were all conducted after that announcement, and all show doubled-digit levels of support for gay marriage, compared to just two- and four-point margins by Gallup and Pew, respectively. That could suggest public opinion has responded favorably to the president’s announcement, but the 9-point margin by NBC/WSJ poll last February calls that conclusion into question.)

The other half of the iMediaEthics poll sample was asked about same-sex marriage using the same format as the forced-choice question, but with an added tag line:

“Based on what you’ve read or heard, do you think marriages between couples of the same sex should or should not be recognized by the law as valid, with the same rights as traditional marriages – or doesn’t it matter to you one way or the other?”

Respondents who expressed an opinion were then asked a follow-up question. If they gave a positive response about the issue, they were asked:

“How upset are you that today, marriages between couple of the same sex are NOT recognized by the law as valid in most states: very upset, somewhat upset, not too upset, or not at all upset?”

If they gave a non-supportive response, they were asked:

“If marriages between couples of the same sex DO become recognized by the law as valid in most or all states, how upset would you be: very upset, somewhat upset, not too upset, or not at all upset?”

Overall, about 30% of respondents who expressed an opinion then indicated that they would not be “very” or “somewhat’ upset if the opposite happened of what they had just expressed. The net results are shown in the graph below.

See above, a graph showing poll results of forced-choice question compared with results when weighing non-opinion and intensity.

Compared with the standard forced-choice approach, the process that takes into account whether people even have an opinion, and whether the opinions that people do express in the poll are firmly felt or not, shows a much different public – just 28% of Americans are intensely opposed to gay marriage, while 47% don’t really care one way or the other, and 25% are intensely in favor.

Based on these results, we can say that roughly seven in ten Americans (72%, according to the chart) are either “not upset” with gay marriage (47%) or very much in favor (25%).

This is a much more accepting public than what other polls typically show. Instead of a polarized country, with just 6% of Americans in the middle, and the rest firmly on one side or the other, the results suggest the issue is not a specially divisive one for the country. A plurality of Americans is in the middle – maybe leaning in one direction or another, but willing to accept either the status quo, or a change in marriage laws.

One indication of polarization in America is that even among party identifiers, there appear to be severe splits – at least when the forced-choice question format is used.  Note, below, that among the three partisan groups, the percentage of respondents in the middle is quite low, with most people on either side of the issue.

See above, a graph comparing poll results by political party

But these results overestimate the degree of intensity that people feel. When taking non-opinion and intensity into account, the views of even partisan citizens appear much different.

These results show that a plurality of Republicans and Democrats, and a majority of independents, do not have strong opinions on the gay marriage issue one way or the other. Even among Republicans, more than half (54%) are not “upset” with gay marriage – the 40% who are not upset if gay marriage occurs, along with the 14% who intensely support it.

Realistic View of the Public

Once non-opinion and intensity of opinion are taken into account, we see a more realistic depiction of public opinion. While most pundits and reporters treat the issue of gay marriage as a polarizing one, the iMediaEthics poll suggests quite a different conclusion. About half of all Americans express intense opinions on the issue, but they are almost evenly divided between support and opposition. The other half appears not to be concerned either with the status quo – or with change.