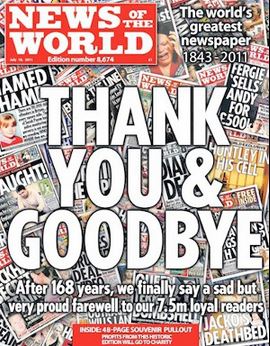 The UK News of the World has been shut down for more than seven years now, but the newspaper’s publisher, News Group Newspapers, is still paying out and admitting to phone hacking allegations against it.

This month, News Group Newspapers settled 16 phone hacking lawsuits against the publisher, 15 of which “related to both the News of the World and the Sun,” according to the Press Gazette. The 16th case was against only the Sun, but “the Sun has admitted no liability in relation to any of the allegations of phone hacking against it.”

A spokesperson for News UK, the parent company of the publications, declined to comment to iMediaEthics on the record.

A spokesperson for Charles Russell Speechlys, which represented nine of the plaintiffs, pointed iMediaEthics to its press release on the settlement and confirmed that News Group Newspapers had to apologize in court. That press release quotes one of the associates at the firm, Claire Greaney, as saying: “Everyone has the right to privacy and confidentiality. Violating that right was simply unacceptable. While our clients have a public profile, their private life is just that – private – and should be respected as such.”