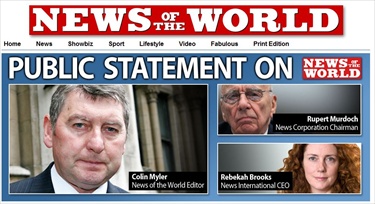 News of the World will cease publication July 10 as a result of the wide-reaching phone hacking scandal, The Guardian reported.  The newspaper’s final edition will be edited by Colin Myler and all advertising in the edition will be “donated to causes and charities that wish to expose their good works to our millions of readers.”

James Murdoch, News International’s chairman and News Corp’s deputy COO, announced the closing in a statement this afternoon. Murdoch commented that “The good things the News of the World does, however, have been sullied by behaviour that was wrong. Indeed, if recent allegations are true, it was inhuman and has no place in our Company.”

He added that the newspaper has “failed” in its own accountability and “failed to get to the bottom of repeated wrongdoing that occurred without conscience or legitimate purpose” since the 2006 police investigation that put private investigator Glenn Mulcaire and former News of the World reporter Clive Goodman in jail for hacking phones.

Murdoch stated that the company will continue to cooperate with police investigations into the hacking. “Apologising and making amends is the right thing to do,” his statement read.

The BBC reported that “Downing Street said it had no role or involvement in the decision” to end News of the World.

In the past week, the list of potential victims of phone hacking by News of the World has expanded to include kidnapped and murdered teenager Milly Dowler, the families of the July 7, 2005 bombing victims, a lawyer involved in the inquest of Princess Diana’s death, and others.

In April 2011, News of the World and News International apologized to some victims of the phone hacking, including actress Sienna Miller, who was awarded $162,500 from the newspaper in a settlement.

The Guardian Q & A : Editor Criticizes the PCC

The Guardian’s editor, Alan Rusbridger, conducted an online question-and-answer with readers about the hacking before Murdoch’s announcement.

Rusbridger disclosed to readers that the newspaper doesn’t “pay for stories” and doesn’t “use private investigators without my permission.”

Rusbridger criticized UK media regulatory body the Press Complaints Commission for its lack of involvement in the phone hacking revelations. He stated that the PCC “can’t go on as it is” and that the groups’ “credibility is hanging by a thread.”

He also called the PCC’s 2009 report on phone hacking “laughable,” but noted the PCC retracted the report this week. He commended the group for its work as a “mediator” and handling complaints and privacy issues.  But, he commented “The trouble is that it sails under the flag of ‘regulator.'”  Since the PCC doesn’t have any “real powers” like “real regulators,” the PCC doesn’t have the capacity to handle or investigate issues like the phone hacking scandal, Rusbridger commented.

He advised the PCC “should either get itself the powers to investigate (compel witness, call for evidence, etc), or it should rebrand itself as a mediation and arbitration service.”

In May 2011, the PCC announced in its annual report that it created a Phone Hacking Review Committee and that the group wouldn’t “interfere with ongoing legal action” regarding the phone hacking. This week, the PCC stated that it is waiting for the police investigation to end before getting involved, as iMediaEthics has previously reported.

Rusbridger added that Prime Minister David Cameron made an “error of judgment” by bringing Andy Coulson onto his staff in 2010. Coulson resigned as an editor at News of the World in 2007 following Mulcaire’s and Goodman’s convictions for phone hacking.  He was hired as Cameron’s communications director, but stepped down earlier this year as the phone hacking investigation expanded.