A Lesson on Ethics, Courtesy of Tiger Woods 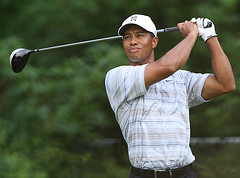 How much do we need to know about golfer Tiger Woods love life versus the war or world financial crisis? (Credit: Keith Allison, Flickr)

In a December 2 post for McGuire on Media, a blog on the Arizona State University Walter Cronkite School of Journalism and Mass Communication’s website, professor Tim McGuire addresses the media ethics involved in the recent Tiger Woods media “circus”.

The Los Angeles Times called the coverage “smotherage”, running an entire article dedicated to the sheer volume of it. Brett Haber writes in a USA Today column, “‘People want answers from Tiger, but not because they need them or have a right to them, rather because they’re curious. I don’t believe any federal judge has ever issued a subpoena on the grounds of curiosity.”

“There are two profoundly disturbing ethical elements of the Woods case. One is this ‘want to know’ problem.  Just because the press or the public is curious, privacy should not be discarded as a respectable concept. Secondly, the idea that information needs to be responsibly sourced is not dead, no matter what you read about this case,” he writes.

He points to columns and posts across several media outlets as evidence, and says, “It is more than a bit sad when we have to look to the world’s greatest golfer for eloquence on media ethics.”

This is a reference to Woods’ December 2 statement:

Although I am a well-known person and have made my career as a professional athlete, I have been dismayed to realize the full extent of what tabloid scrutiny really means…But no matter how intense curiosity about public figures can be, there is an important and deep principle at stake which is the right to some simple, human measure of privacy. I realize there are some who don’t share my view on that. But for me, the virtue of privacy is one that must be protected in matters that are intimate and within one’s own family. Personal sins should not require press releases and problems within a family shouldn’t have to mean public confessions.

In a column posted on the same day, Adam Ostrow of Mashable.com wrote, “Tiger’s right. While we’ve come to expect a certain level of transparency from companies, brands and even public figures thanks to social media, it’s not our God-given right to know what Tiger does in his personal life, as many seemed to think it was in the days following his accident.”

In his ethics courses at Arizona State University, McGuire says, “I hammer home to students the distinction between three levels of information: right to know, need to know and want to know.”

“Right to know” situations are those when readers literally have the legal right to know. “Need to know” concerns government, safety, business and societal matters. The “want to know” is pure nosiness. “People want to know some really kinky stuff so reputable news organizations have traditionally developed some standards that say ‘hey that stuff is none of our business.  It is prurient. There is no need for us to know that stuff,’” he writes.

And now, McGuire says, “That quaint concept may have died this week because of an unrestrained media’s desire to cover Tiger Woods, his car accident and perhaps every single sexual misadventure in his life.”

“I know I am accused of being a journalistic dreamer, but I pray I did not miss the memo that said speculation about rumors is what really matters. I am so old I remember the day the National Enquirer was considered a joke in newsrooms. Things don’t become news just because some irresponsible fool asserts something. In journalism we verify facts in an attempt to show they are true!” He blasts an ESPN.com column for straying from the ethics course, then commends two columns that actually highlight the lack of ethics in the current coverage.

In closing, McGuire offers a guideline for determining the newsworthiness of a story, a concept journalists are expected to learn in JOUR101:

Responsible journalists should scour the ethical textbooks and come up with some standards for publishing private information that meets the goals posed by questions like these when we consider what to publish and what not to publish. How about a list of questions like this?

· Let’s analyze the common good. Is it served by knowing this?

· Is there a journalistic purpose?

· What about a Golden Rule metric?

· Is there a need to know or a want to know?

He concludes by saying, “I argue knowing about Tiger Woods’ sex life is not bettering the common good. There is no legitimate journalistic purpose to publishing unsubstantiated rumors.”

A Lesson on Ethics, Courtesy of Tiger Woods