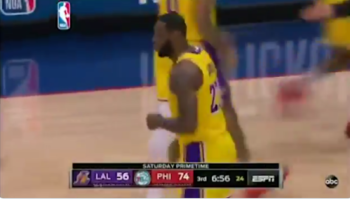 A screenshot of LeBron James during the BBC report

In its report on Kobe Bryant’s death, the BBC used footage of LeBron James playing basketball.

A clip of the segment, which showed images of Bryant and James, was posted on Twitter.

Paul Royall, a BBC editor, apologized on Twitter. He tweeted:

“In tonight’s coverage of the death of Kobe Bryant on #BBCNewsTen we mistakenly used pictures of LeBron James in one section of the report. We apologise for this human error which fell below our usual standards on the programme.”

In its own news story on the error, the BBC noted it aired the apology Royall issued after the report. The BBC explained of its error:

“Footage of James beating Bryant’s career points tally appeared in the BBC’s News At Ten programme on Sunday. But the voiceover did not explain why viewers were seeing James on screen at that stage, rather than Bryant.”

iMediaEthics has written to the BBC to ask if it aired an apology; the BBC declined to comment further to iMediaEthics.