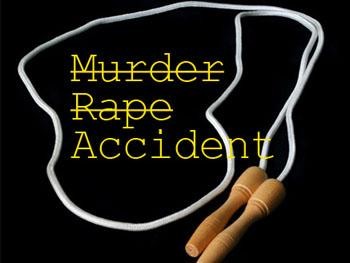 On April 23, the New York Daily News filed a story about the death of of a young girl named Monique Fulgham. Its sensational headline declared “Girl, 5, Raped, Killed With Jump Rope” and stated that the young girl had been sexually assaulted and strangled with a jump rope. It even presented speculation that her grieving mother and grandmother may have been involved in the crime. Worse, after publishing their speculation, they printed the mother’s name and address, making it possible for outraged readers to knock on the family’s door.

As days passed and the story unfolded, it became clear that Monique’s death had been an accident. Her neck apparently got caught on the rope as it was hanging from her closet.

How did the News get it so wrong? There were, in the course of the 314 word story, nine references to anonymous sources that implied multiple spokespersons (i.e. “police sources,” “cops said”) as well as “one shaken investigator.” It is also impossible to determine the total number of sources being used and whether or not the same anonymous sources are being recycled throughout. Three people – or thirty – could have provided the News with its faulty information.

The three writers that reported the story – Alison Gendar, Oren Yaniv, and Bill Hutchinson – haven’t filed any sort of correction, explanation, or apology.  Instead, the paper published two follow-up stories (here and here) revealing that her death was an accident, without ever admitting that they originally printed a gruesome error.

“It was only speculation,” Calone said. “Obviously, they were speaking to the wrong person.  I’m not being flip, but you know, I mean, she wasn’t raped.” Since they left no clues about what went wrong, I consulted the outlets who got it right.  The New York Times, The Sun, and The Post all refrained from repeating the rumors.  Of the three, Larry Celona of the Post wrote to me with a very simple explanation for his prudence: “There was no evidence.”  Did he hear the same rumors when he was on the scene?  What made him decide that these sources were not definitive enough to rely on for his report?

Not everybody was as skeptical about the News’ unverified reports and off-the-record sources. Journalists from 1010WINS repeated the misinformation under the headline “Brutal Murder of Bronx Girl,” which attributed the rape rumor to “various sources.”  This story was published without a byline, and I found out that the reason for this is that much of the reportage is not original.  Many WINS articles are paraphrases of Associated Press and other reports.  (Click here for the “corrected” version, which still implied that Fulgham may have been murdered and her mother was a suspect.)

So it goes. One influential newspaper makes an error then other news agencies propagate it throughout cyberspace.  As demonstrated in my chart, 7online and CBS News both published stories suggesting that Monique Fulgham may have been raped, but at least these outlets pointed out that the allegation had not yet been confirmed.

However, the caption for the photo accompanying the 7online.com story read, “Police are investigating the rape and death of a 5-year-old girl in the Bronx .  Police say she as [sic] attacked in the home and hanged with her jump rope.”  The updated story “Bronx child’s jump-rope death ruled an accident“ (emphasis mine) fixes the problem with the main text, but blunders again by leaving the photo caption stating that she was raped and murdered.

It’s an awfully suspicious claim.  How would the officer have made that judgment — through a post-mortem examination at the scene?   Assuming the source did make such a statement, the reporter had an obligation to ask further questions to confirm whether or not the statement is trustworthy.  The Daily News declined to comment on whether they had used these sources in the past or would continue to use them in the future.

But now we have a clearer idea about the number of sources used to confirm the error that Monique Fulgham was raped. We still don’t know how many were consulted in the article altogether, and we don’t know the reasons anonymity was granted, which, according to Poynter, newspapers are obligated to disclose. For example, in their coverage of the Fulgham death, the New York Times adheres to this convention by quoting “a police official who spoke on the condition of anonymity because the cause of death had not been determined.”

While the use of anonymous sources in crime reportage is pervasive, the rules are disconcertingly murky.  According to media ethicist Kelly McBride at Poynter, “I can almost guarantee that if you were to get all of the reports from all of the tabloids that worked on this story in a room together, they would say, ‘We couldn’t get anything in the paper if we didn’t use anonymous sources.’  I would say that it is the cultural pressure of that particular reporting market.”

I asked, “With the pressures of the market, would most news sources not have the time to wait for an official statement?”

She didn’t fault the News for this practice, saying that their evidence “crossed the threshold” for what most papers would print.  However, she stated that there is “absolutely no reason” that a paper shouldn’t reveal the reasons for granting their sources anonymity.

Whether they had three anonymous sources or three hundred, the fact remains that all of them were wrong and, to this date, the Daily News has not filed an apology or admission of error. “We did not get the story wrong,” Mauer persisted. “We report stories in real time as they happen. This particular story was breaking between 9pm and 1am.”

So between these hours, by Daily News logic, young Monique was raped and murdered – and after 1am, she died in a tragic accident.To carry this spin to its absurd end, one could reason that before Copernicus came around, the sun actually did revolve around the earth.

Hugh Davis, a member of the ethics committee for the Society of Professional Journalists, takes issue with the News calling an updated story a “correction.”

“A correction is a correction,” he emphasized.  “It’s up to the people to be upfront and say, ‘We made the error.’”After weeks of persistence, the paper admitted to no such thing. The News’refusal to admit a mistake in a story that no other outlets got wrong – and hostility toward anybody who tries to hold them accountable – doesn’t bode well for keeping brutal, and false, speculation out of the news.