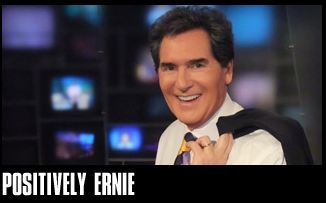 Is the news a downer?  New York’s  WNYW/ Ch. 5 TV news anchor Ernie Anastos reportedly tries to balance the news with more optimistic stories, according to the New York Daily News, which recently profiled Anastos’s attempt to “put a positive spin” on the news.

Anastos, who has worked in TV journalism for more than three decades, commented to the Daily News that “the image of the news is you have to do something bad to get on the news.  We have to turn that around.”

So, in May, Anastos will feature those positive stories in a “special” called “Positively Ernie,” which is also the name of a section on MyFoxNY’s website and Anastos’s website devoted to promoting “positive” and uplifting stories.

Anastos introduces the features as making “you feel better about life, people and yourself.”

Some of the segments posted on his website include short video segments on a baby girl “caught up in the earthquake that rocked Haiti” and stuck “in the rubble.”

Another example from “Positively Ernie” featured the story of a Nebraska woman who moved her wedding to her grandmother’s nursing home because her grandmother would likely be unable to travel for the wedding.

“I’ve heard it enough times to really feel that’s why I have to put some of these better stories on,” he reportedly told the Daily News. “I’m the messenger. If I can bring better stories on the air – and working within the system – then I’m making a difference.”

Anastos said to the Daily News that he wanted to “balance” the negative stories.  “Let’s get some positive stories on the news as well.”

His statements mirror those of South African children who complained to the Press Council of South Africa that media reporting on children is always for negative reasons.  Those children said they like “reading about other children’s achievements.”

iMediaEthics has written to Anastos for comment and will update with any response.